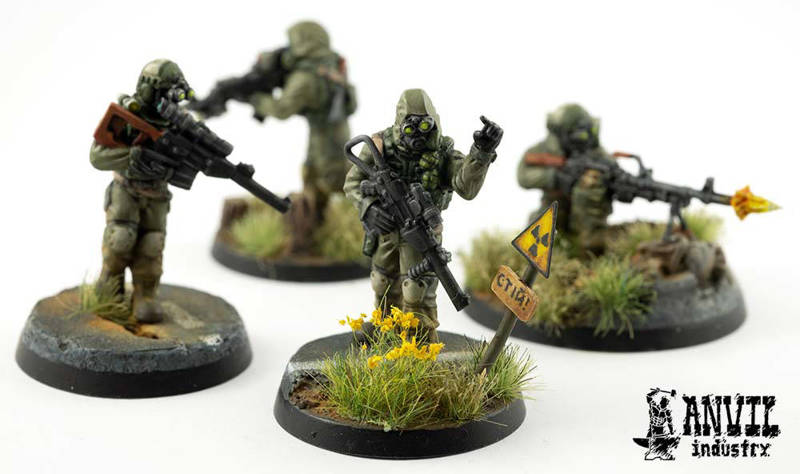 After teasing you a bit on social media, here are Anvil Staffer Adam’s Zona Alfa Spetsnaz in all of their elite special forces glory!

Zona Alfa is a great system for small skirmish games, and lets you explore concepts without committing to a 100+ model army! I wanted to do something influenced by the Spetsnaz, the Russian special forces- equivalent to the SAS or the American Delta Force.

Historically, the Spetsnaz have used to extract high-value targets, sabotage objectives, and assassinate key targets- perfect for the background of Zona Alfa.

The two hooded heads were custom made. I took the Empty Hoods and carved them out a little to fit in the Gasmask Head. The other two are Ops Core With Balaclava heads and Ops Core Night Vision Googles. 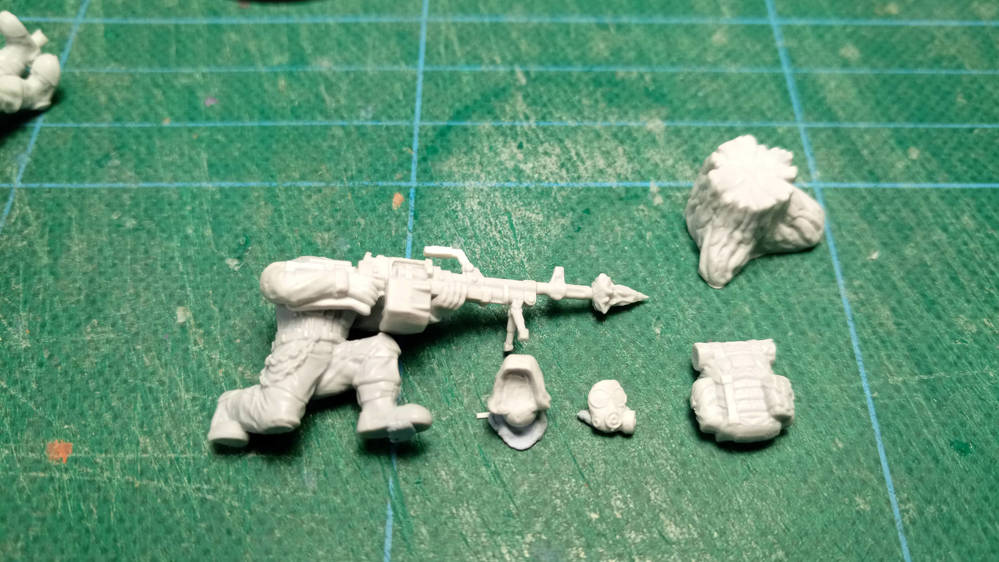 The torsos also involved a bit of work. I wanted the kneepads from the Boilersuit Renegade range and picked out two from Advancing, one from Static, one from Sitting/Kneeling. Tut the torsos were obviously unsuitable, so I cut them off and replaced them with the Load Vest Torsos These had body armour, radios, and all the other grubbins you’d need doing field operations.

The guns were a lot of fun to model. AS Val and VSS Vintorez are both based on our Dragunovs, with the front grip and barrel cut down, replaced with a plastic rod barrel (and a barely visible plasticard front sight). 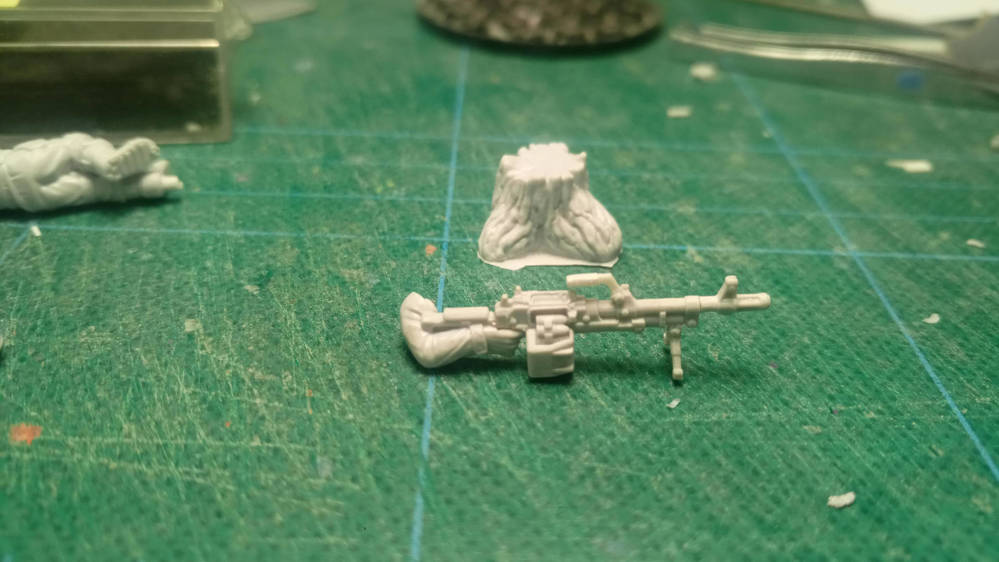 The wire stock of the Val is a paper clip bent into shape. To get the weapon to fit with the ‘gun down on a sling’ pose I used one of the arms with AR-15s with the AR-15 cut off.

The PKM uses a Dragunov stock with the arm attached, Bren gun main body up to the barrels and AK-47 front sight and muzzle brake. The box magazine is a Large Box Mag with a plasticard carry handle. 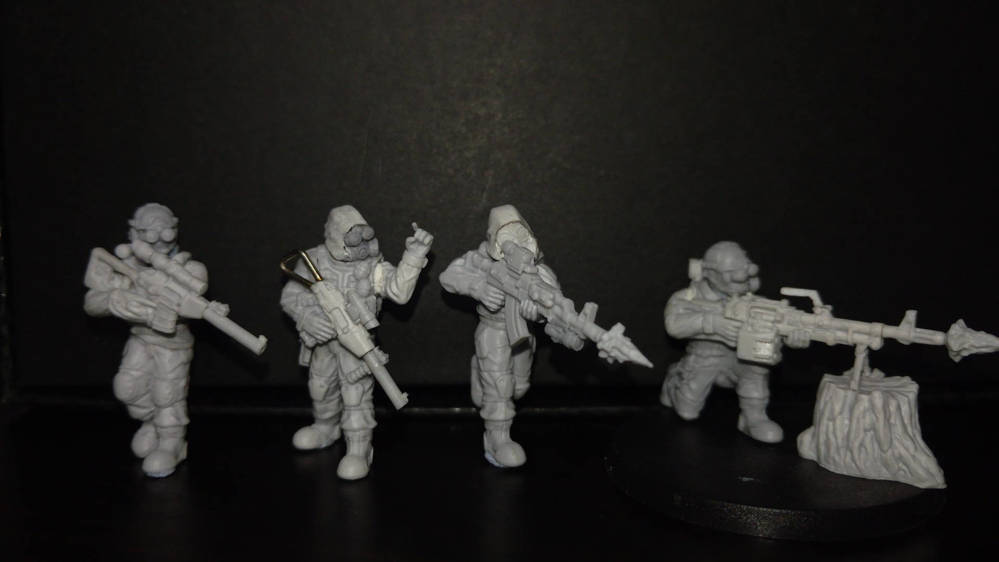 Zona Alfa is such a strong setting, so I wanted my bases to reflect that. I didn’t want to go for just generic rubble, or cartoon style glow in the dark radiation! I wanted to convey the creeping dread of abandoned civilisation- a place where it was dangerous to tread. 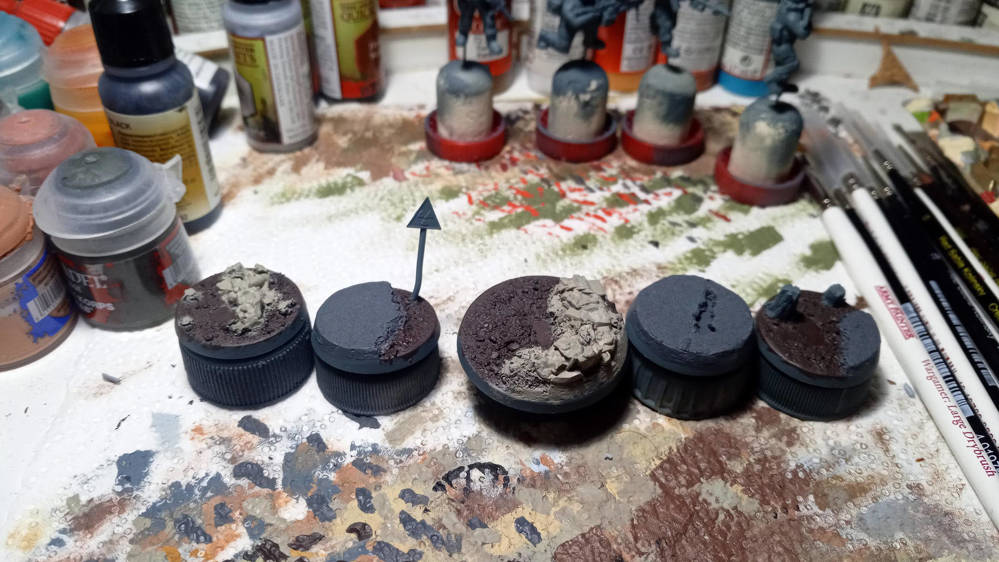 After the initial undercoat, the base colours were added on to give me a solid foundation to work with. 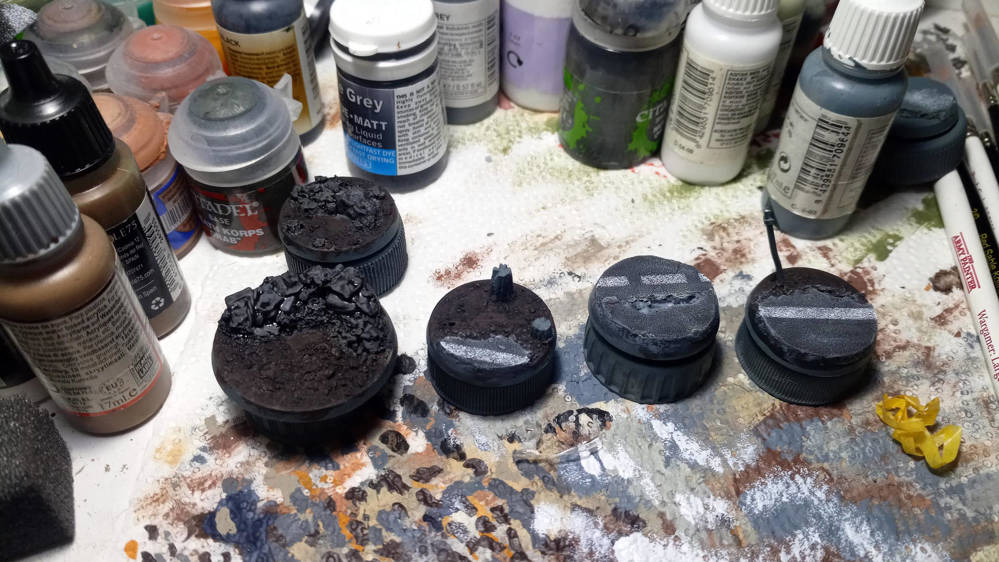 Pigments were used for the dusty earth, and splashes of colour like the red bricks and the tree stumps were picked out. 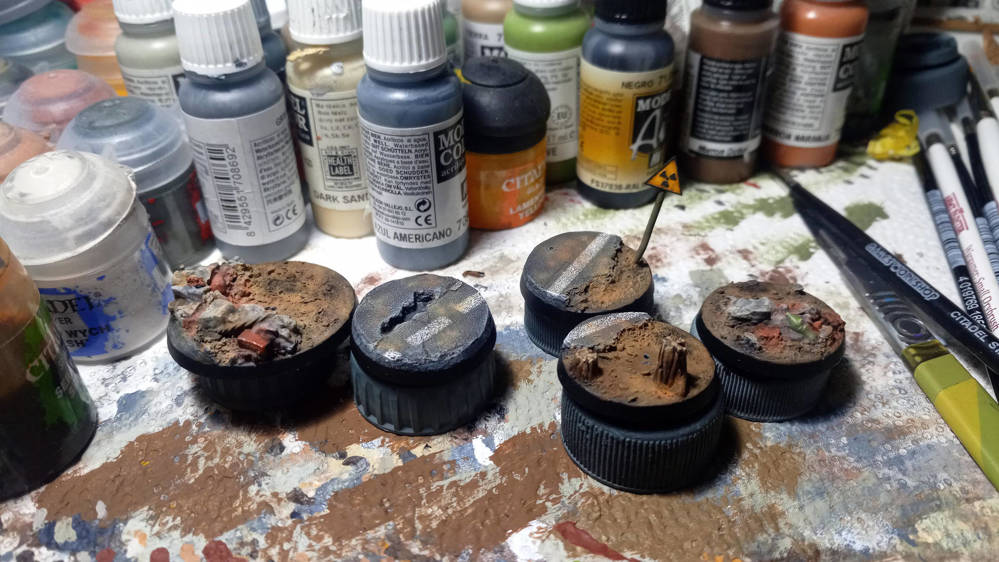 The Finished bases, looking pretty good if I say so myself! 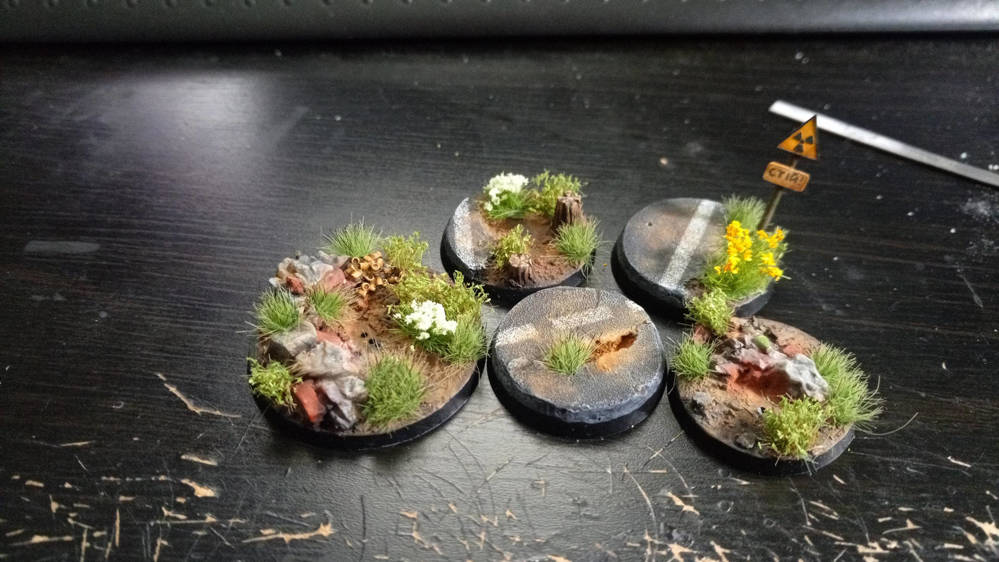 I decided to put the running models on the tarmac- I imagined them darting across the street from cover to cover, or providing suppressing fire as their comrades move to the mission objective.

Finally, when it came to painting these guys up, the most important thing to me was to give them a splash of colour. The models themselves would need to be military greens and browns. But by adding some brighter colours, I made sure the models will still look exciting. For example, the lens on the gas masks and the Muzzle Flashes really stand out. 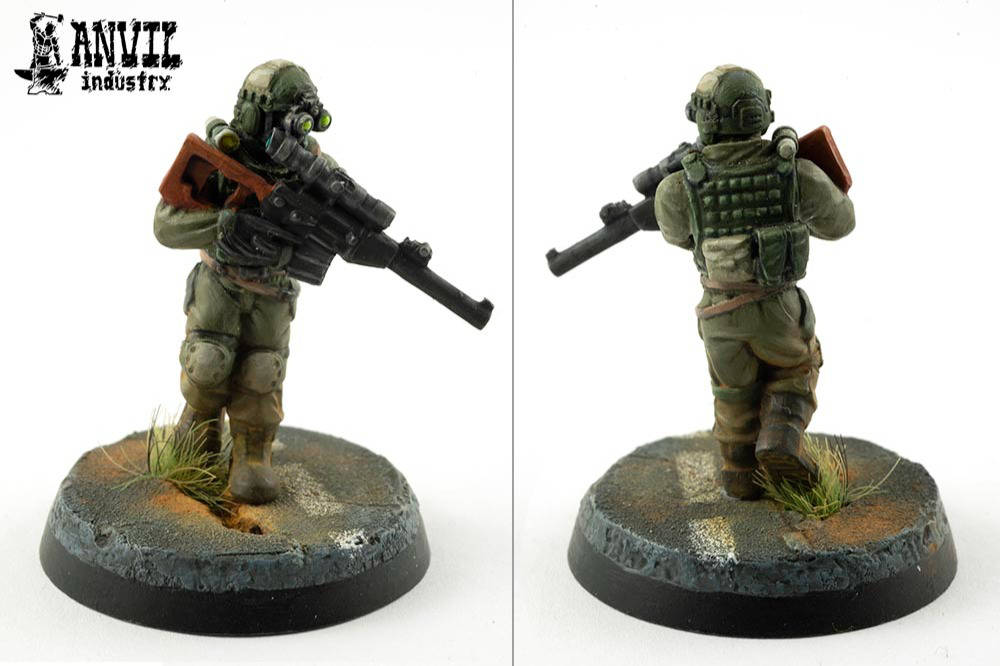 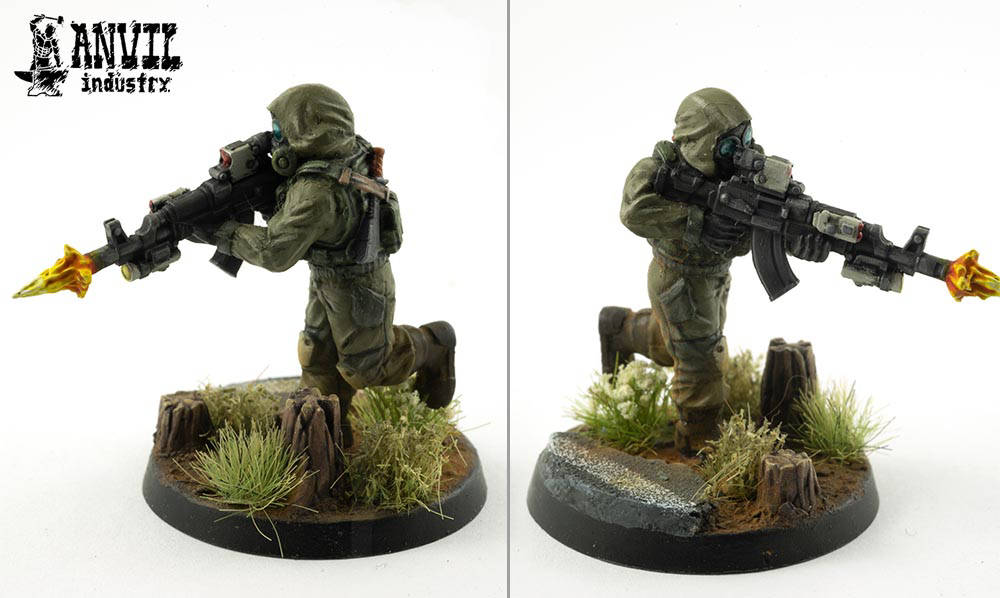 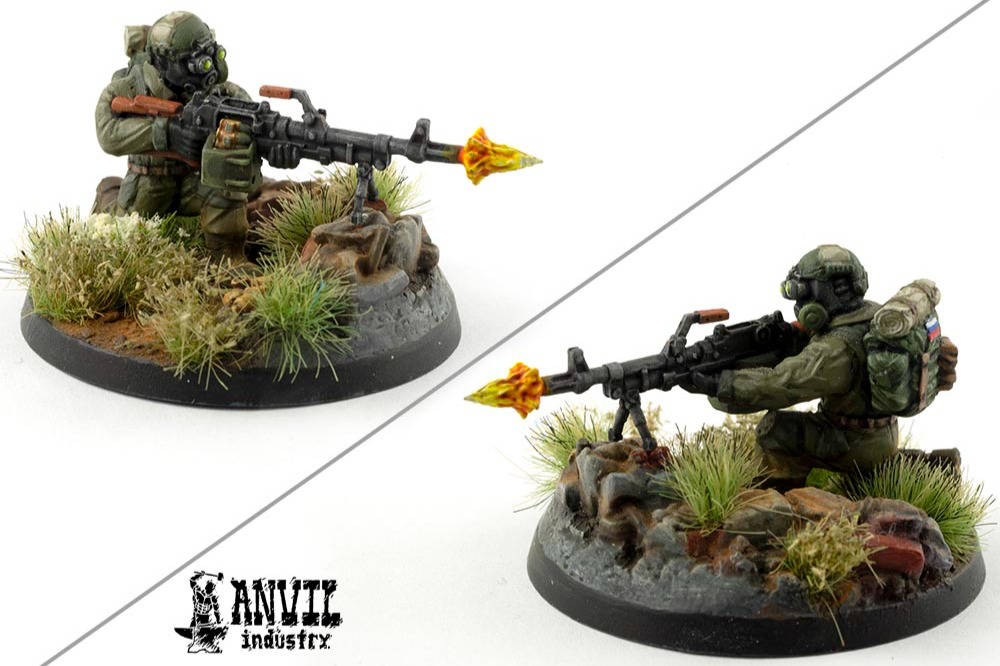 I added some lovely daffodils! Just because you’re fighting a terrifying clandestine war within the Exclusion Zone, there's no reason not to brighten up the place! 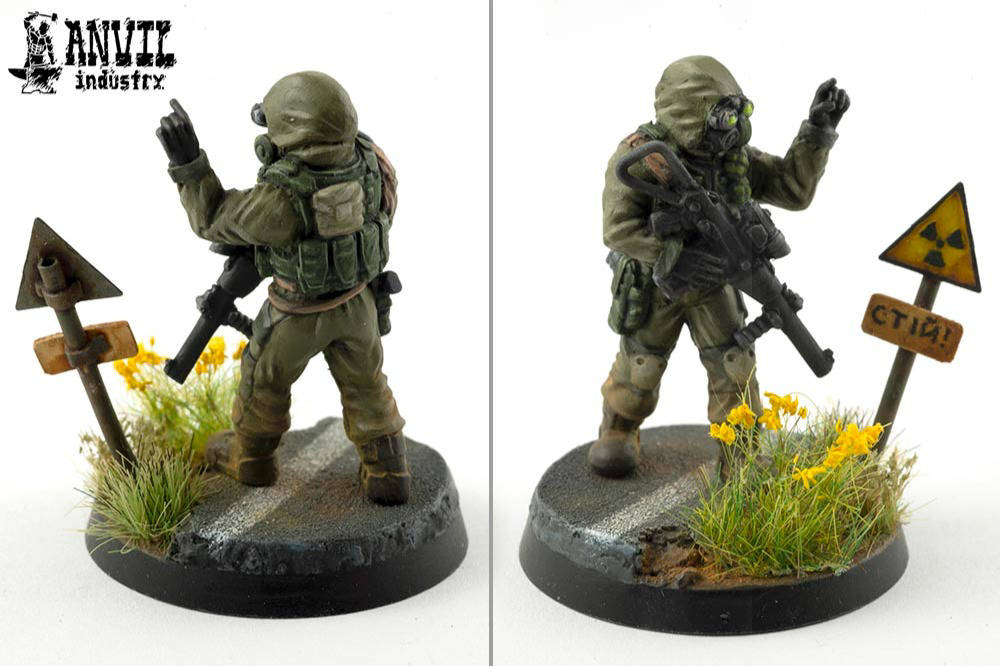 WOW! Some great models there. If you're working on anything for Zona Alfa- or if you're putting together another Anvil project, we'd love to hear from you. Drop us an email to Media@anvilindustry.com.

Leave your comment
Comments
Alex
1/27/2022 6:34 PM
Being a huge fan of Zona Alfa, this just makes me very happy. спасибо!
Guest
1/27/2022 7:38 PM
Outstanding work. I feel a sudden need to place another order. Thanks for the inspiration.
Oh and welcome to the Zone, comrade.
- patrick todoroff
stalker7.com
Guest
1/28/2022 8:50 AM
At present I am working on a ZA project.  It is a great setting with very strong aesthetic.  The abandoned Soviet buildings and iconography coupled with creative freedom for figures is fantastic.

Top work with these guys, they look on-theme and are well executed.
Guest
5/2/2022 8:58 AM
These. Are. Amazing.
That PKM conversion is gold.
Blog search
Blog archive
Popular blog tags