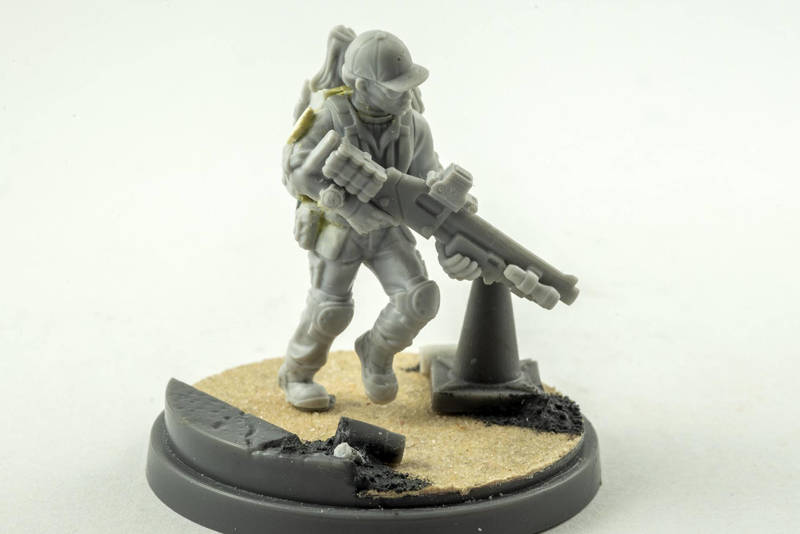 Hello and welcome to another Conversion Corner!

This time round we're going to be chatting to Anvil Staffer Adam about his conversions inspired by Division agents from Tom Clancy's The Division 2. Each agent n the unit has their own personality, and Adam has done a superb job in bringing these elite operatives to life. But enough waffle from me, let's find out how he did it.


This is a modified version of a model previously featured in our Conversion Corner blogpost (PMC Agents), with the arm from Digital Forge male drone controller character and a head from Digital Forge Wasteland. I wanted to make a model that although he is a tech expert, he could still kick the snot out of you! 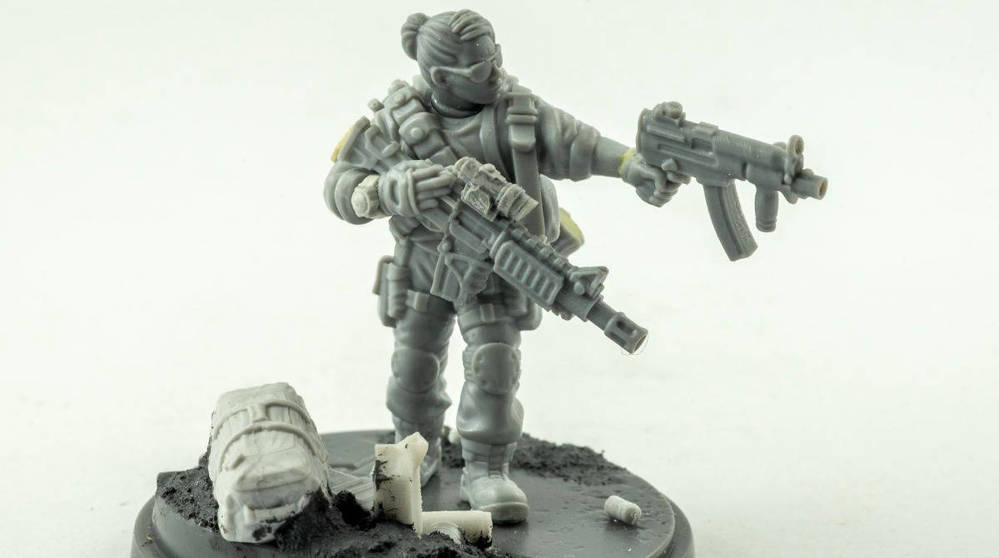 I really wanted a cool action pose- sprinting across the street while returning fire! The shotgun was carefully cut and swapped for an AR-15. I picked out a suitibly bad-ass looking Female PMC head with shades to give her that "cool under fire" look. The smartwatch is my favourite thing on this mini, but it was incredibly fiddly to create! It is a lens from the Exo-Lord Holographic sights, with 0.2mm plasticard strap. Complete faff, but it was worth it!

For the shotgun specialist, I used Digital Forge female PMC / Fatigue bits with Secret Service head, torso and shotgun from Digital Forge Wasteland. The running pose gives a really nice contrast to the bulk to the shotgun. She's moving swiftly, but not covering or running. The pose, along with the hat and sunglasses combo gives her a fantastic self-assured look- she's a champion markswoman and a F.I.S.H specialist.

The most extensive conversion in the set, the arms were originally a pair of Dragunov arms, with the rifle cut out to fit the new weapon. The Mk12 SPR rifle is one of our AR-15 variants, with stock and pistol grip added, a scope combined from the Dragunov's scope and the front half of a Regiments sniper scope, a plastic rod suppressor & bipod from Regiments Weapon accessories. The torso is from Digital Forge Wasteland. I went for a scruffy, dangerous look. This is a guy who spends a lot of time on his own. His clothes are worn, especially on the knees, and he's clearly a man of few words. 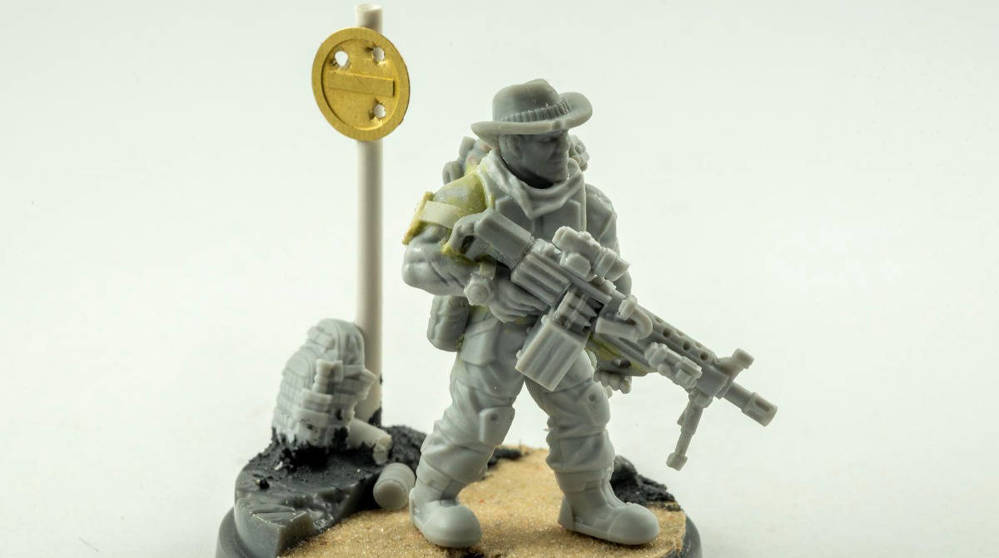 The last member of the unit is a survival expert- a veteran used to operating in hostile terrain. The scarred Jungle fighter arms with the stock removed were added to a PMC armour torso. I cut a  Boilersuit body the waist for the legs and used a Digital Forge Wasteland backpack to build the body of the model.  The armband and strap for the smartwatch is 0.2mm plasticard. The head is a digital mashup of two of our Digital Forge August character heads with a cowboy hat cut from a model from RN Estudio availible here. For the M249 LMG I cut the stock and angled foregrip from a Digital Forge Drop Troop bullpup carbine.


Before we leave you, I just wanted to show you another picture of those fantastic bases! Subtly done, but with an air of urban decay that gives the whole unit an air of danger. 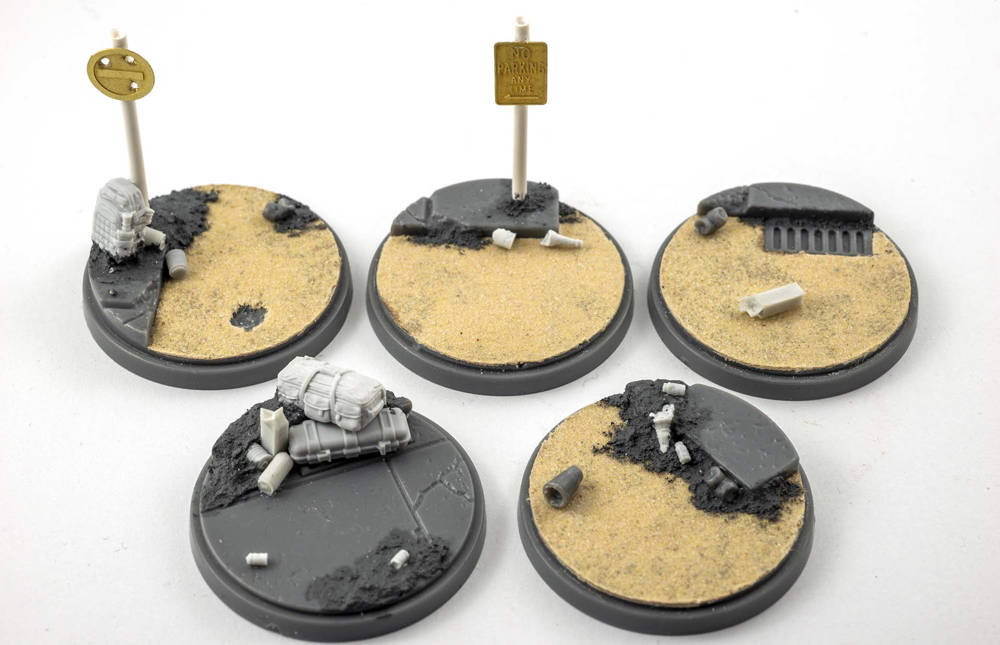 In Grim Dark settings it is accepted that weapons are ridiculously large.  Sadly when trying to model a PMC with AK/AR etc the overly large guns look ridiculous.

I can't find (or recognize) it.

Thanks,
Mickael
Guest
12/31/2021 10:28 AM
Really nice modelling, the sort of thing i aspire to, but frequently fall short!
Guest
1/3/2022 7:02 PM
Awesome conversions, I'd love to see the PMC line in STL so I can print them in 32mm size.  As another user noted, the weapons are oversized for reality, but if you're doing XCOM-like stuff, they work out just fine.
Blog search
Blog archive
Popular blog tags