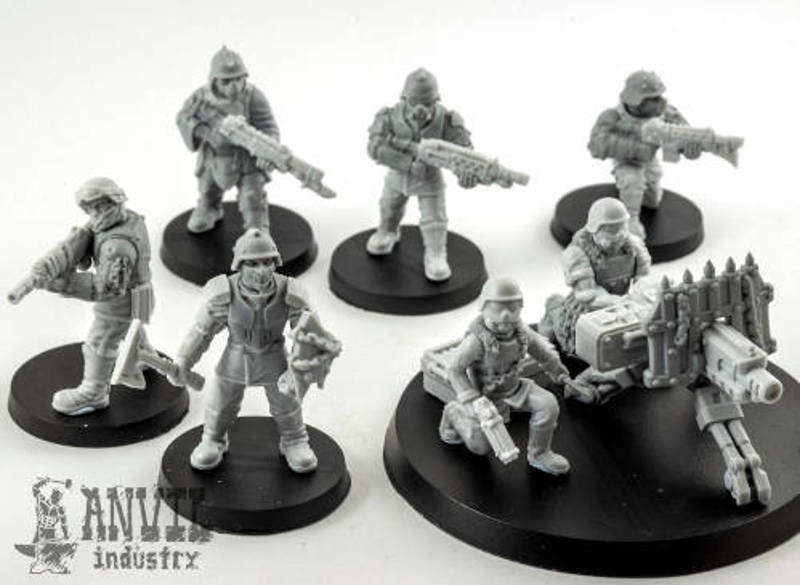 Hello everyone! Today I’m going to briefly talk about our Digital Forge 3d prints and polyurethane (casting) resin lines, and just how interchangeable they are between the two!

We use a grey resin for 3d printing, which doesn't help to differentiate it from our cast resin in photos! But if you look closely, the printed parts are a darker grey, and the cast resin is a lighter grey.

Above you can see a Regiments infantry squad bolstered with a heavy weapon team; and the great thing about them is that they’re a mix of both our expansive Regiments range, including Dress Uniform, Robed Cultist and Modern Military parts, as well as many parts available from the Digital - Armoured Renegades Bundle; our first fully pre-supported digital offering.

Critically, there was absolutely no need to modify those files from the bundle. None at all; we’ve used exactly the same process that we would internally when designing our “Master” parts for resin manufacture, but released them early so to speak, as fully pre-supported STL files for you to print at home!

When printed at their supplied scale, without any modifications they are perfectly sized to be fully compatible with any-and-all of our Regiments parts. That’s true of both the infantry and heavy weapons.

I just took the pre-supported files from the bundle, arranged them on the build platform in the 3D printer’s slicer program, then transferred them to the printer and pressed Print!

Some of you may be familiar with the concept of a sci-fi rogue military force, and the parts from the armoured renegade infantry bundle, alongside some more regimented modern military and dress uniform parts, gives this squad more than just its own unique flair; it tells a story of their transition from an ordered fighting force into a chaos-causing militia.

I hope you enjoy this gallery of combined parts from our two methods of making miniatures. Rest assured that most of our Patreon offerings are beginning to make their way into our regular resin range. You can think of our Digital releases as a peek into the process of us designing whole new Regiment ranges, and gaining early access to them to use while we go through the lengthy process of turning a printed prototype into a new product!

And before you go, I’ll also say that we’ve got another Blog post coming soon that will detail the process I go through when preparing some printed parts, as well as a few options for those of you who want to print our digital offerings but critically don’t own your own printer.

As with the Regiments range itself… we’re all about giving you the options!

How about Wasteland Wanderers? You can do that too by mixing Modern Post-Apocalypse with Militia, Robed cultist and some Renegade Rifles / Shotguns

Cyberpunk Gang? We’ve got you covered there too with a mix of our Cyberpunk Bundle, plus our PMCs, Bionics, and Modern Military parts.

We are proud to keep delivering the most expansive and modular infantry kits on the market, with truly endless part combinations and ranges that just keep expanding month - by - month!