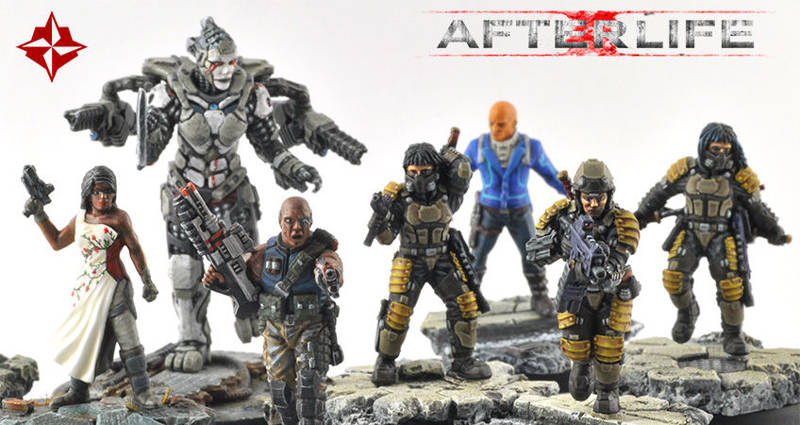 We all know how it plays out in the films, the main characters bravely fight off wave after wave of enemy grunts and emerge victorious, bar one or two casualties on the way.

The Character rules in Afterlife emulate this, to some extent, so we thought we’d play the scenario.

The setup was simple, the Republic command group has become pinned in a corporate tower, and an endless stream of Unity Council (and even some turncoat Republic!) forces are coming to finish them off, how long can they survive!!

Unity Council Forces, able to respawn when the unit is wiped out:

The game board was our Iconic 2x2 foot “Sector N” Unity City block, it's corporate tower and mag-lev station giving plenty of cover and tactical options. Russ played the heroes, I played the Unity Council.

Russ won the roll off and positioned his first unit, Idaho and Kira, next to a side door on the tower block. My activation was more challenging, I calculated he would most likely deploy his Characters high up, to gain the advantage of a good defensive firing position. Therefore I didn’t want to waste time going in a street level and working my way up the building from the inside, this only left the approach through the mag-lev station.

The main route in for my mechs was along the mag-lev line, risky as it left me fully exposed. The wardens moved on and tried and failed to detect Idaho and Kira. 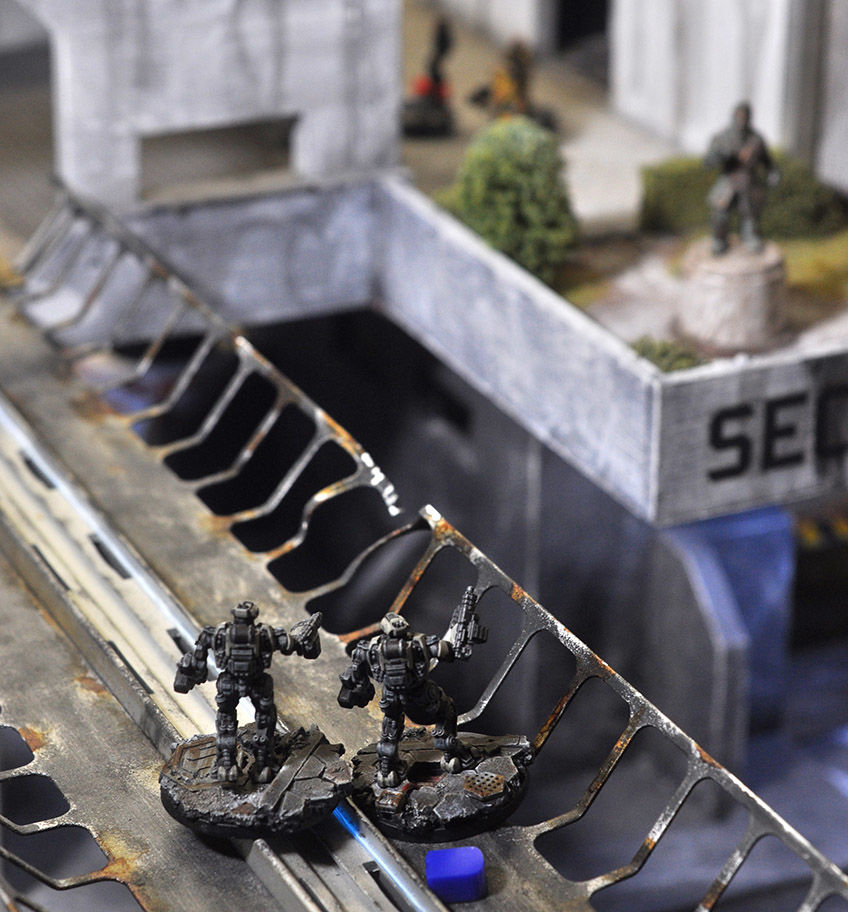 Wardens deploy along the mag-lev...risky.

Russ then took advantage and moved Ellion into play on the balcony and immediately one of the Wardens paid the price.

I added another prong to my attack with a unit of Unity Guard deploying from the back of the mag-lev station, but a brief firefight with Idaho and Kira saw their numbers reduced to 3. 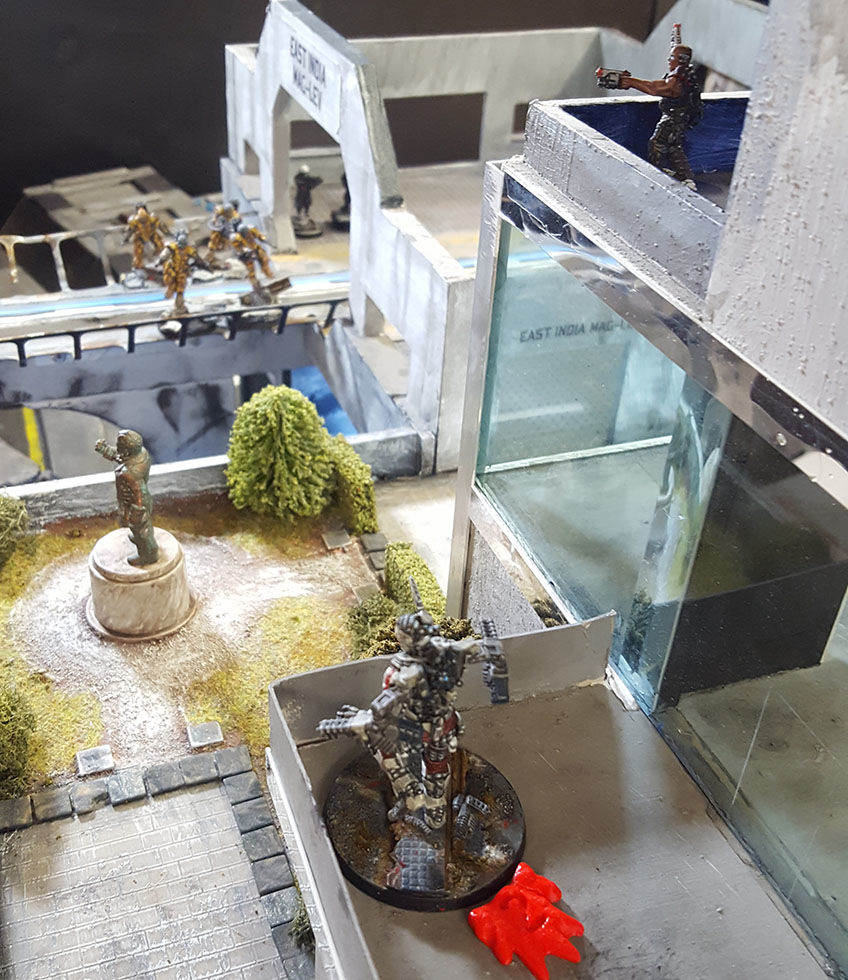 Russ moved the Protos out onto another balcony so I bought the rogue Pulse Mechs on as backup, in a brutal exchange 3 Pulse mechs were taken out, though the Protos sustained 2 wounds in the process.

Russ moved the Protos back into the building for cover, so I pressed on with my Warden and fired at Ellion, with the inevitable result that the Warden was taken out in return fire! At this point Ellion was looking unbeatable. 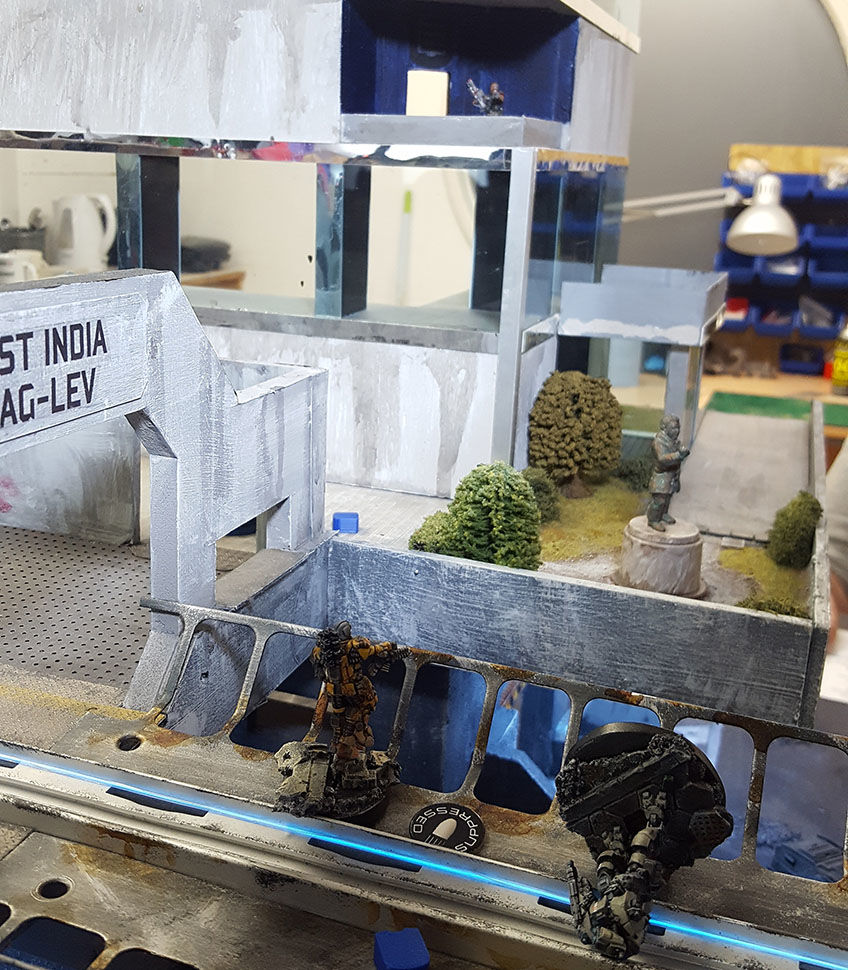 Another Warden bites the dust.

Russ moved Kira and Idaho back into the building, so I seized my chance and pressed forward. A Guard with a flame thrower led the unit to the doorway and flamed Kira and Dakota where they stood! 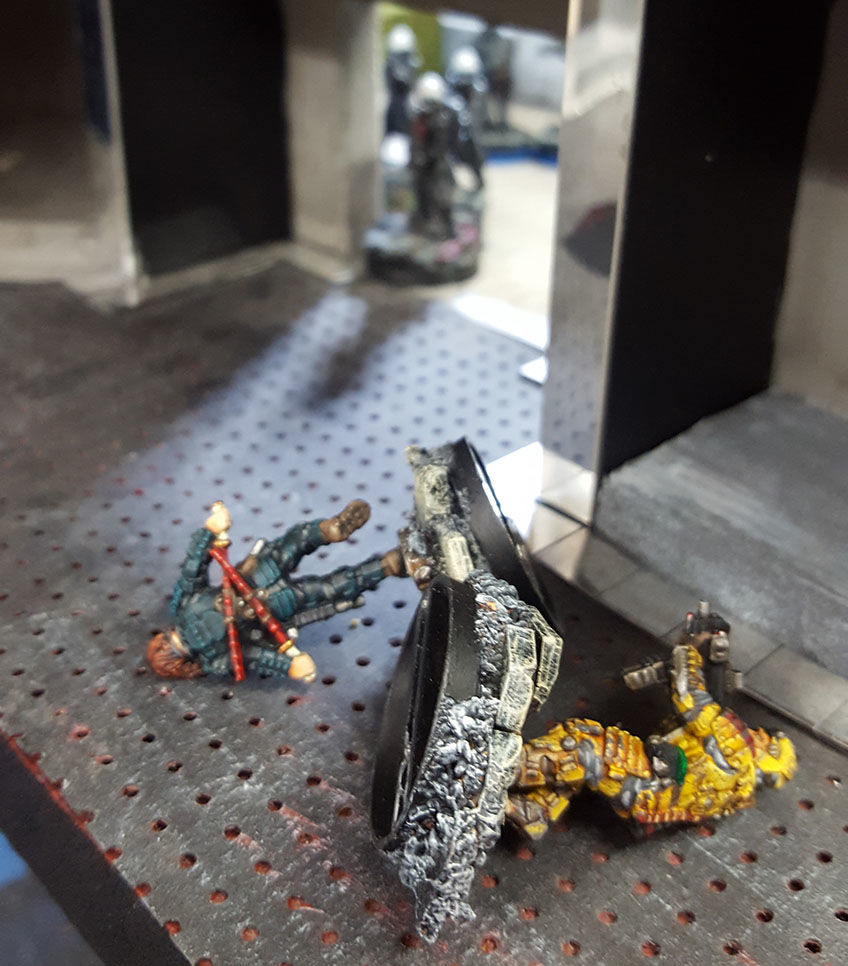 Not liking this, the Protos took out said Unity Guard from across the room, but the damage was done. 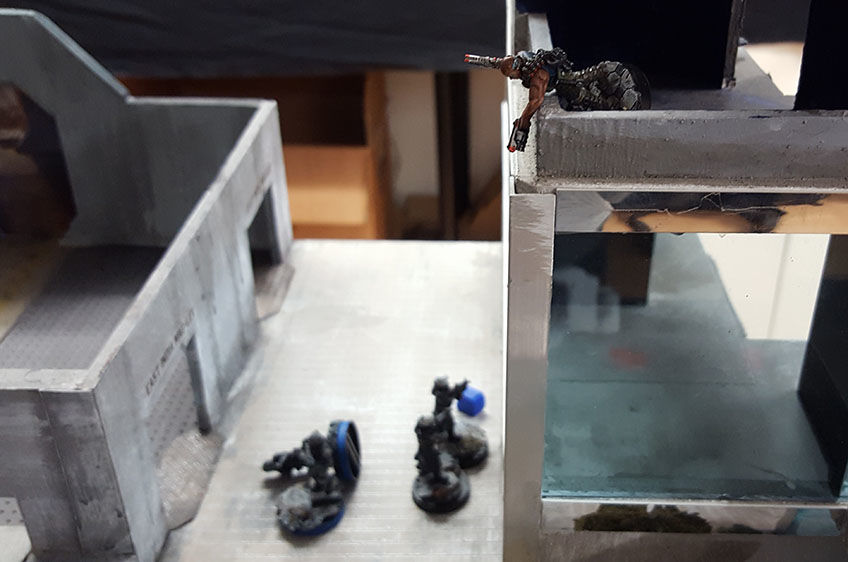 Some of my Spectres had joined the Unity Guard at the entrance to the building. Desperate to keep the advantage, Ellion leant over the balcony and downed a Spectre, but then took one for the team as he was hit by deadly return fire. 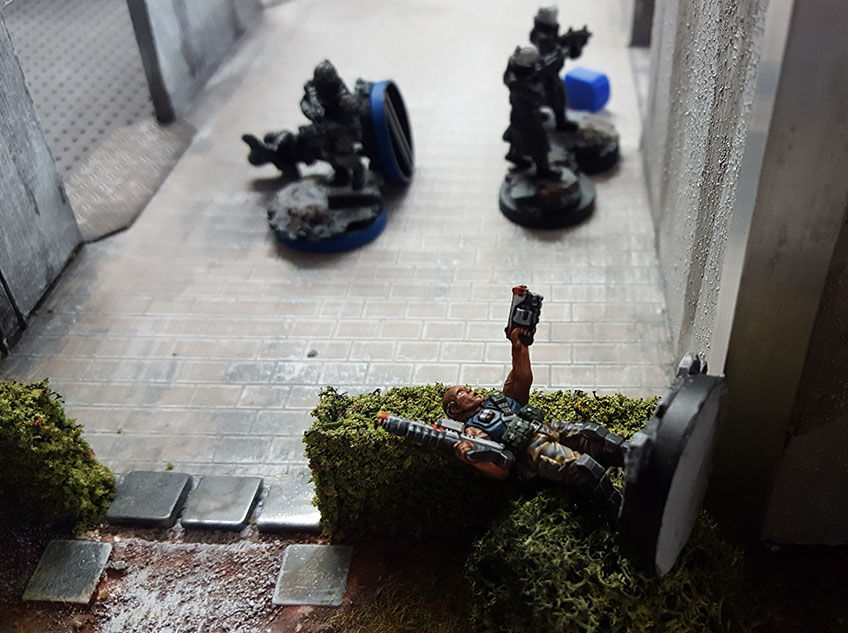 Ellion takes one for the team.

I pressed on with the Council forces, the Protos was quickly dispatched, leaving Vargo and Natalya to make a last stand on the second floor.

What followed was a flurry of activations, reactions and game turns as Russ used every last Fate Point (these allow Characters rerolls to change their destiny) at his disposal to fend off the attack.

The attackers were reduced to 1, but then 2 Wardens arrived in reinforcement, only for one of them to immediately take a bullet in the CPU.

Vargo, leader of the Republic, was shown no mercy and fell, leaving the second last stand to Natalya, who was able to inflict a wound on the remaining Warden, before being gunned down. 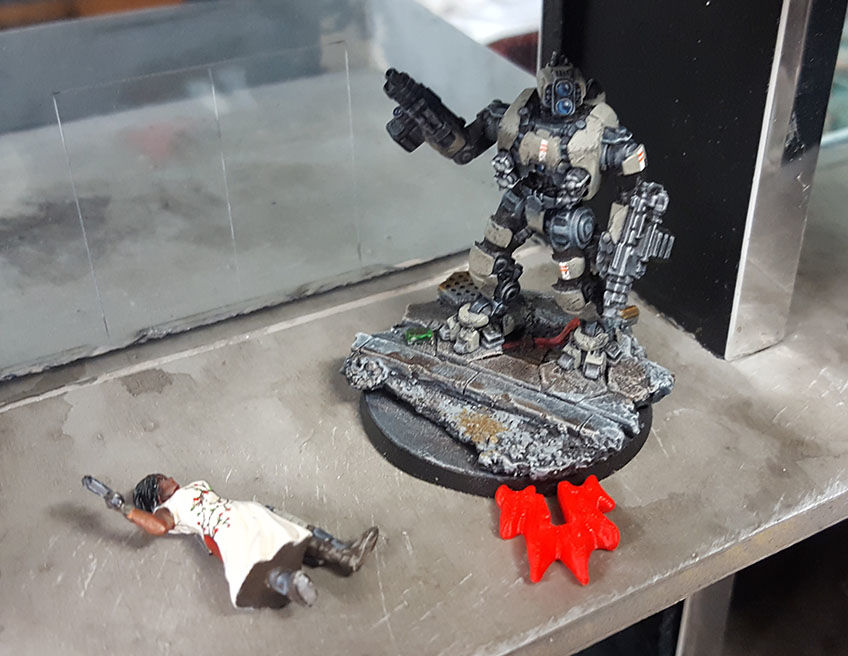 This is easily the most epically good fun game I’ve played so far! The rerolls Characters have enable them to get out of impossible situations, adding to the drama and excitement, but can be defeated with the strategy and enough firepower, making a victory against them all the sweeter.

That said victory for the UC was inevitable, as we let the game run until all Characters were defeated, with limitless reinforcements. It would be fairer to set a limit to the number of game turns or have fixed credit values, to give both sides a chance of winning.

Download the character rules and have a game this weekend, let us know how your film ends!