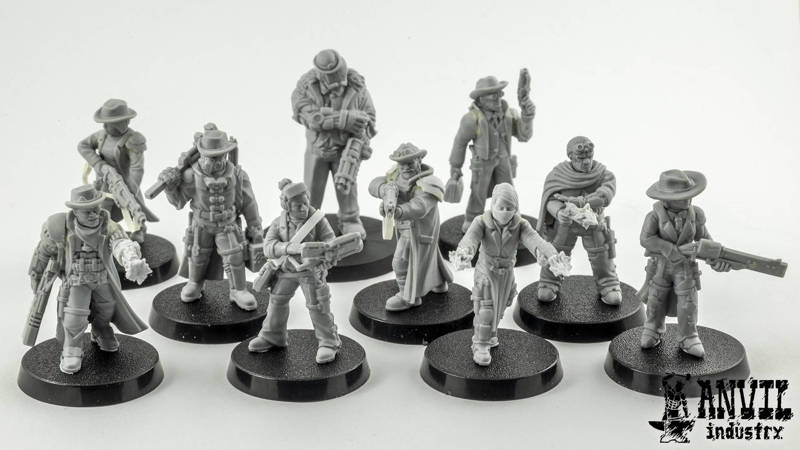 Like many gamers, we have been waiting excitedly for the Stargrave rulebook (https://ospreypublishing.com/stargrave), and in the studio we have been working on different crews using the Regiments range and 3D print from Anvil Digital Forge. In this blog post, staffer Adam takes us through his approach, using and adapting CAD sculpts from our download packs. Some of you might already be backing our Patreon (https://www.patreon.com/anvildigitalforge) and have access to the files to make these miniatures, if not you can find them in the Digital Forge category on the website.

With the Stargrave release and our Space Western theme of digital downloads on Patreon both happening in April I took the opportunity to build a custom crew (based on space western/sci-fi worlds we all know and love) AND learn some basic CAD sculpting in the process! 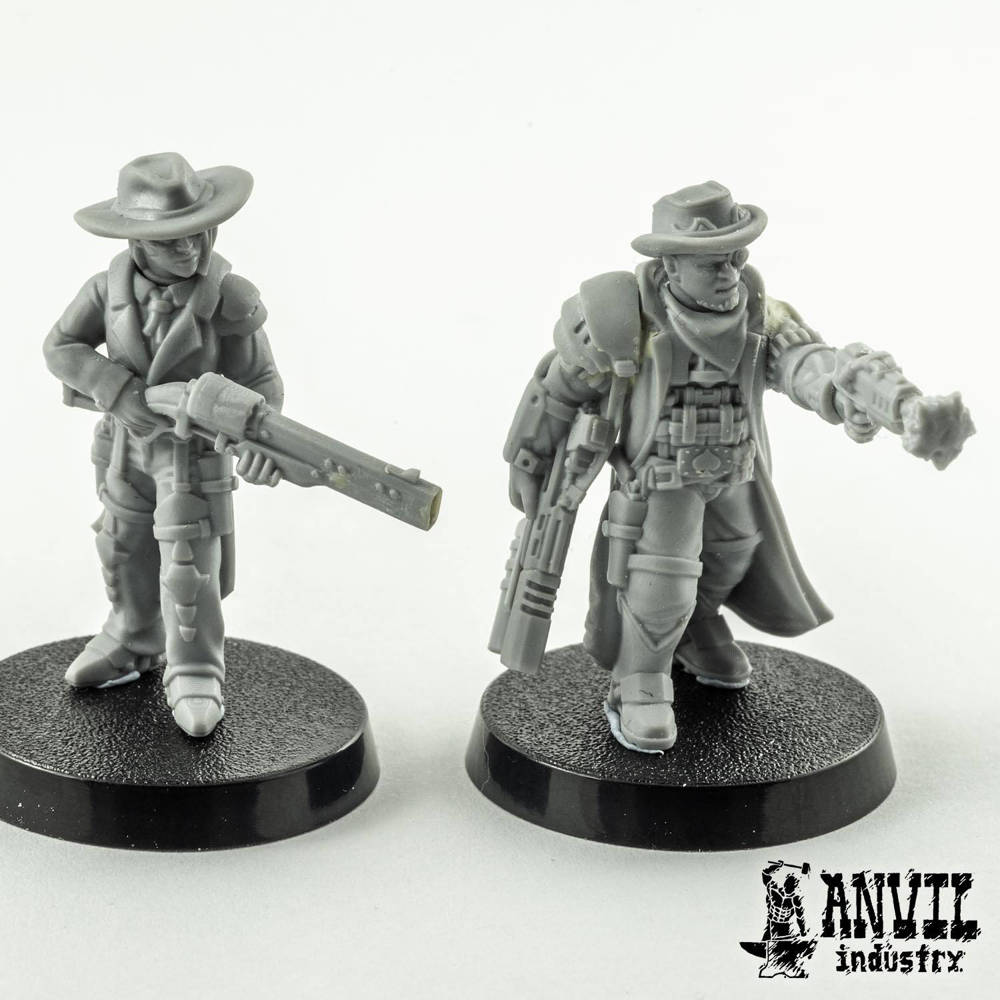 The Rogue and Veteran backgrounds were perfectly fitting for the ideas I had in mind for the leaders of my Crew. These models both feature custom digital sculpted parts and digital kitbashes from various Patreon releases.

The Captain uses a Space Western female body with arms from Over The Top, and a base hat from Cyberpunk with a cowboy hat added. Since a captain needs an impressive hat, I have flattened and extended the brim in Blender. Her rifle and back patches were sculpted in Blender and finished in Zbrush. The model was printed as a single piece with a separate head.

The First Mate is a veteran ex-drop trooper! I imported one of the male Space Western bodies into Blender and overlaid a Drop Trooper torso and used the ‘flatten’ and ‘scrape’ tools liberally until the torso could fit inside the coat. His long gun is the CQB variant from the Drop Troop booster pack with a custom sculpted barrel extender/suppressor. The left arm and pistol are resin parts with an inverted muzzle flash for an energy blast effect. His belt buckle is a custom sculpt done in Blender. 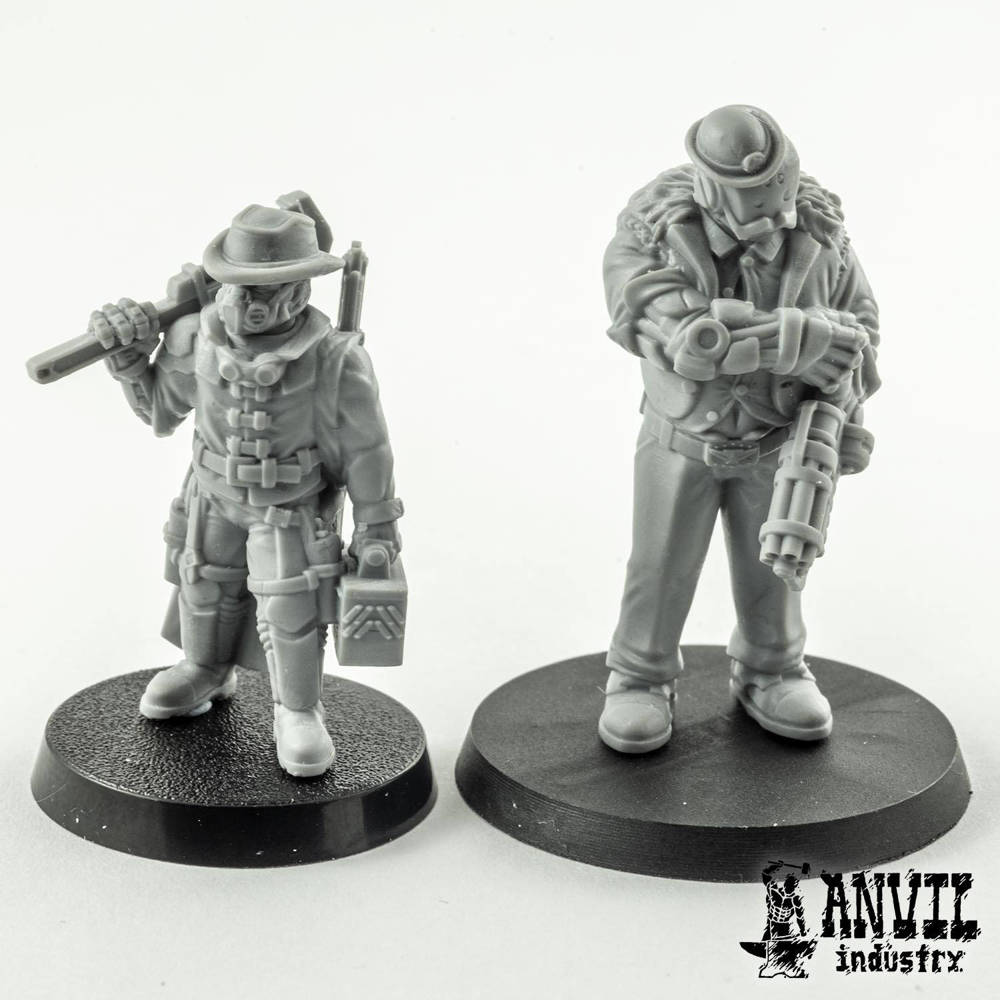 The Casecracker doubles as my ship’s mechanic, so I needed to show enough tools and gear reflecting this - a toolbox and spanner from Automata, and a large custom wrench held in a bionic hand (I used the Light Mech builder for this, then scaled it down to Regiments scale). The bionic arm is the ‘rifle on shoulder’ Space Western pose with the hand removed.

The Gunner is my Captain’s robot bodyguard. The Cyberpunk bouncer’s body with the arm-mounted minigun replacing his hand, and the robot bartender’s head with custom sculpted facial hair and eyes, and of course, a bowler hat! 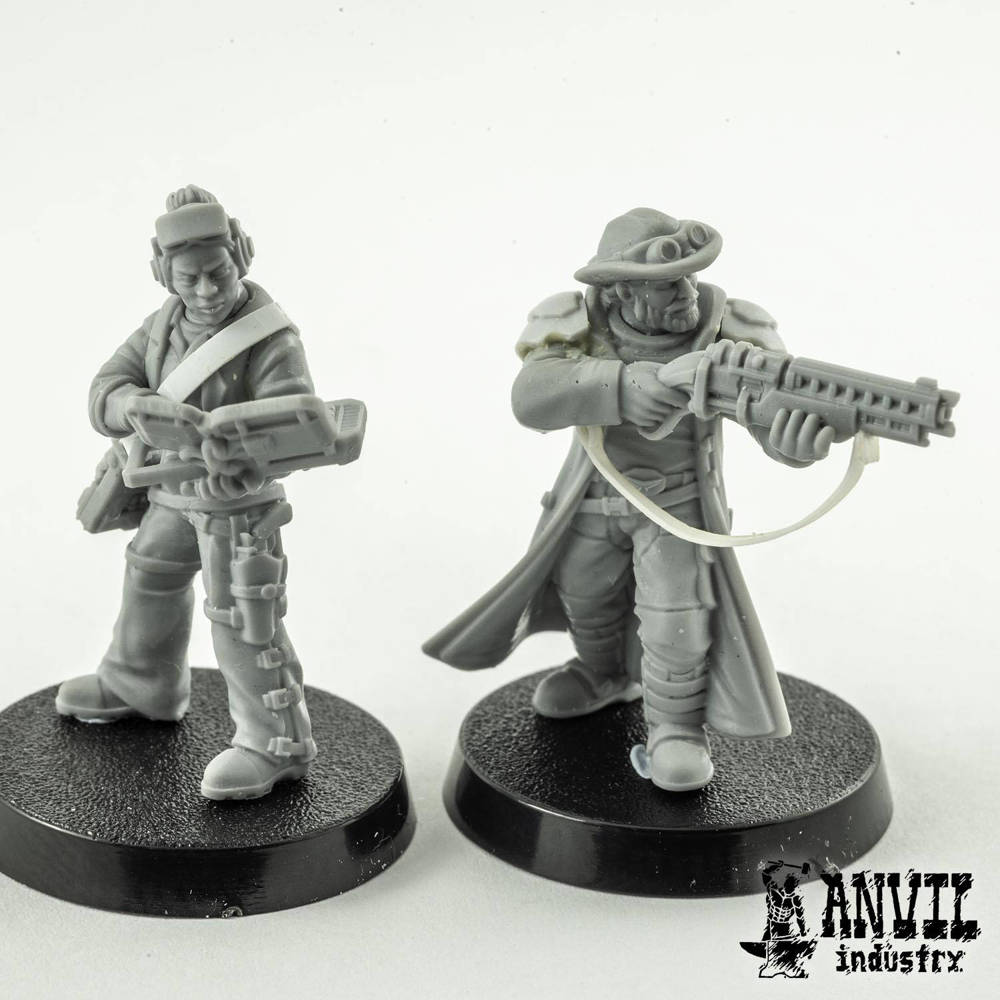 The Hacker features Space Western female torso and legs, Cyberpunk cyberdeck arms, and the head from the Automata Female Drone controller (probably one of my favourite heads in the entire Regiments range!). Her shoulder bag/tech gubbin is the Patreon Welcome Pack Lena’s tech briefcase with a strap made from 0.25mm plasticard.

My first Trooper was made with a Cyberpunk long coat body with Space Western arms and weapon (with a 0.25mm plasticard strap). Resin Marine shoulder pads represent his heavy armour. 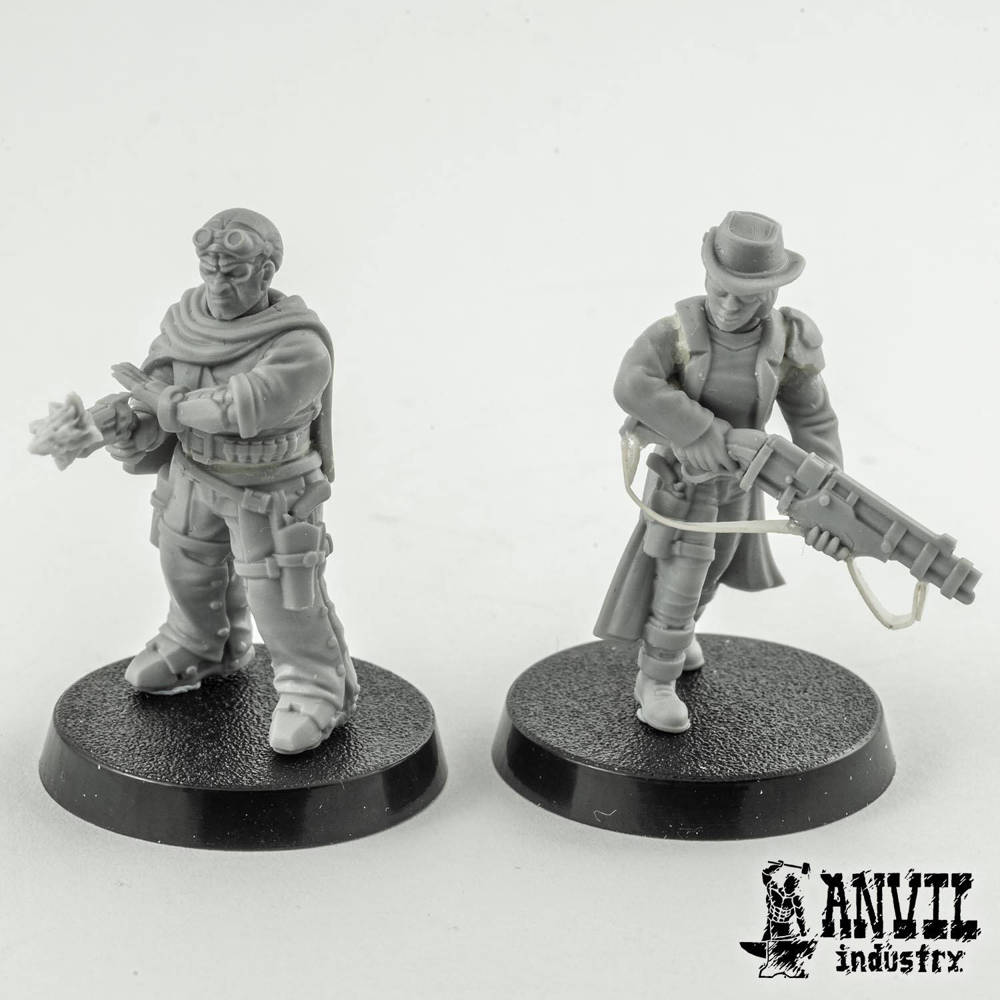 The Runner is almost entirely from Space Western, with an Alien Hybrid head and a small muzzle flash.

The second Trooper is another Cyberpunk body / Space Western weapon and arm combination. 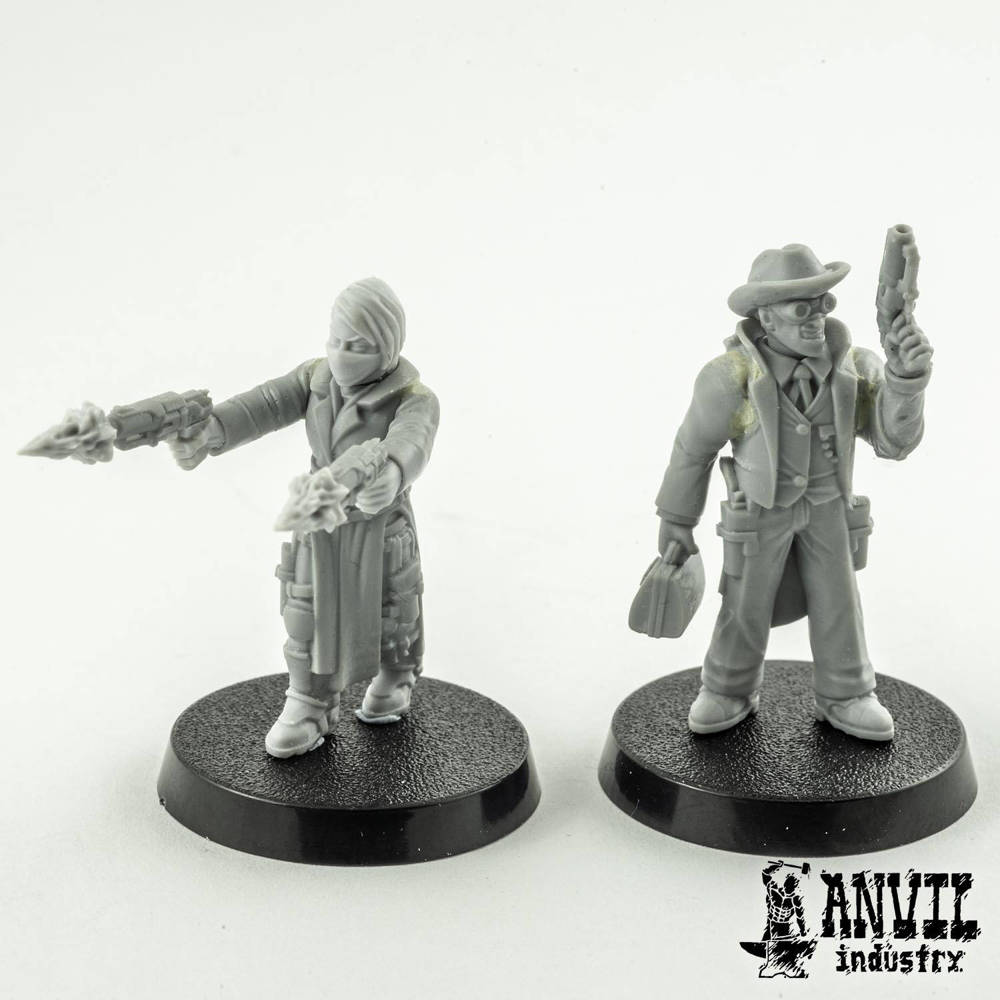 These models both use the Shotgun Pistol from Cyberpunk as it also works really well as a sci-fi revolver!

The female Runner is mostly Space Western bits with a Female PMC head for the outlaw look.

The Medic is a modified version of the Sawbones body (with revolver holsters), an Alien Hybrid head and the doctor’s bag from the Over The Top medic.

This blog post is not associated with or endorsed by Osprey Publishing or the creators of Stargrave, we are using it as an example of games Anvil Industry miniatures are compatible with or suitable for.

Leave your comment
Comments
Guest
4/30/2021 8:02 AM
I have not yet used CAD for figure creation but know well the value of using the method for vehicle design.

Great work.
Guest
6/28/2021 10:17 PM
Really, really excellent work.  Very inspiring.  This is the sort of thing I aim to do as well although I am interested heading in more of a Pulp Noir direction.  I can see real potential in a Cyberpunk/Space Western Mashup.
Guest
7/5/2021 11:25 AM
Thought the cyber and western ranges were perfect for that I was going to do. Although I’m playing Five Parsecs From Home instead of Stargrave.
Blog search
Blog archive
Popular blog tags