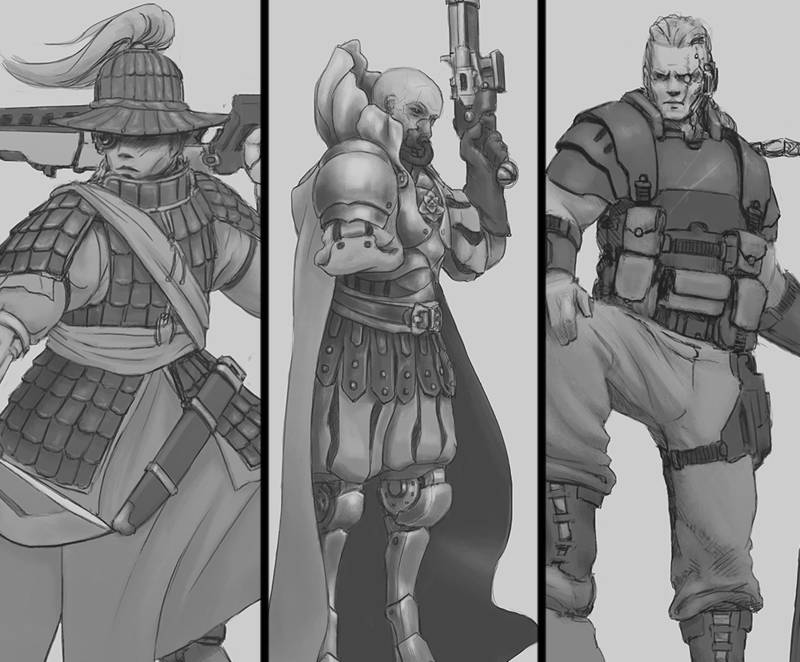 We've been extremely busy over the past few months learning how to best use Patreon, and our Digital Forge project is off to a strong start!

Patrons of the Digital Forge get a pack of high-quality STL files every month with a personal licence for home 3D printing! The cost is just $9 USD per month!

Back in May, just before the launch of the Digital Forge, we asked people to submit a design for an original miniature! We had a large number of high-quality entries and the overall quality was excellent, making it very difficult to select concepts to shortlist!

It's taken a little while longer than we planned to get to this stage in the competition and we apologise for the delay!

We are really grateful for the obvious time and effort people put in, and we hope to showcase some of the designs which did not make the shortlist in a future blog post.

Our TOP THREE Entries were chosen by Anvil staff.

Jonathan submitted a new concept for a character model for our Daughters of the Burning Rose range. A veteran honour guard who has been severely wounded in numerous battles and perhaps now lends expertise and leadership rather than participating directly in the fighting.

The elite Gapsa Regiment stand far above the regulars and militias of Taehan’s Garrisons. During the War of the Noryang Sector, the Gapsa Regiment was deployed alongside the Expeditionary Red Bannered Marines, acting as a defensive QRF in response to the Veteran Privateer Federation’s many devastating landfall raids.

It's future unclear in wake of Admiral Li Shin’s untimely demise, the Gapsa Regiment continues to fend Taehan’s borders, even as it is stretched thin by protracted conflict and meddling noble courtiers.

The Helix Legion is famous throughout the Core Systems for its martial prowess, tenacity in the attack, stubbornness in defence and unquestionable loyalty… if the price is right. Gene-bred for size, strength and resilience, the scions of Talas Prime are instructed from an early age in all forms of martial combat.

Varrus Teal was formally Preator of a full assault Cadre, and an inspired tactician and masterful strategist. A bloody meatgrinder in which most of his unit was killed caused Varrus to resign his commission and leave the Legion. He now leads the “Valkyries”, mercenaries dedicated to providing support and extraction in the most hopeless situations.

So, which of these designs is your favourite? Head to the Patreon page to vote by Sunday 9th August:

The winning model will be sculpted and included with this month's Digital Forge STL file set!

The more complete artworks above were based on line drawings, which are equally stylish in their own right!