When will Digital Forge products be available in resin? and other questions, answered! Red Army Inspired Regiments 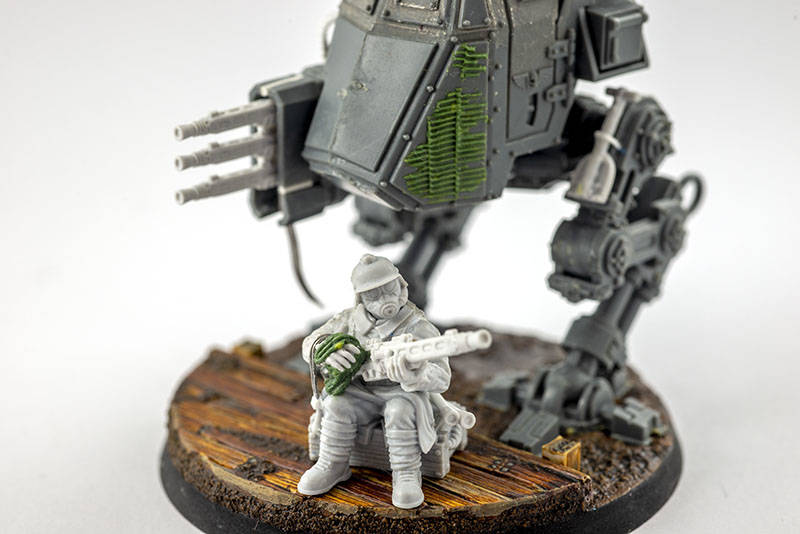 In this edition of Conversion Corner, Daniel from the Anvil Studio Team takes us through a couple of his Sentinel dioramas.

Anvil’s parts are often focused on as the base for the creation of an army of Regiment miniatures and/or the addition of extra parts on to other company’s miniatures to give them your own unique flair and style. Today I’m focusing on the latter application of our parts with some custom Sentinels from Games Workshop.

I’ve always been a fan of the Sentinel mech and couldn’t resist adding some of Anvil’s bits to really evoke a different feel for them and to pay homage to some of the lesser represented Astra Militarum regiments. Here is my take on using Anvil Industry parts to create small dioramas for both a very popular World War german inspired and British-Colonial era inspired regiment. 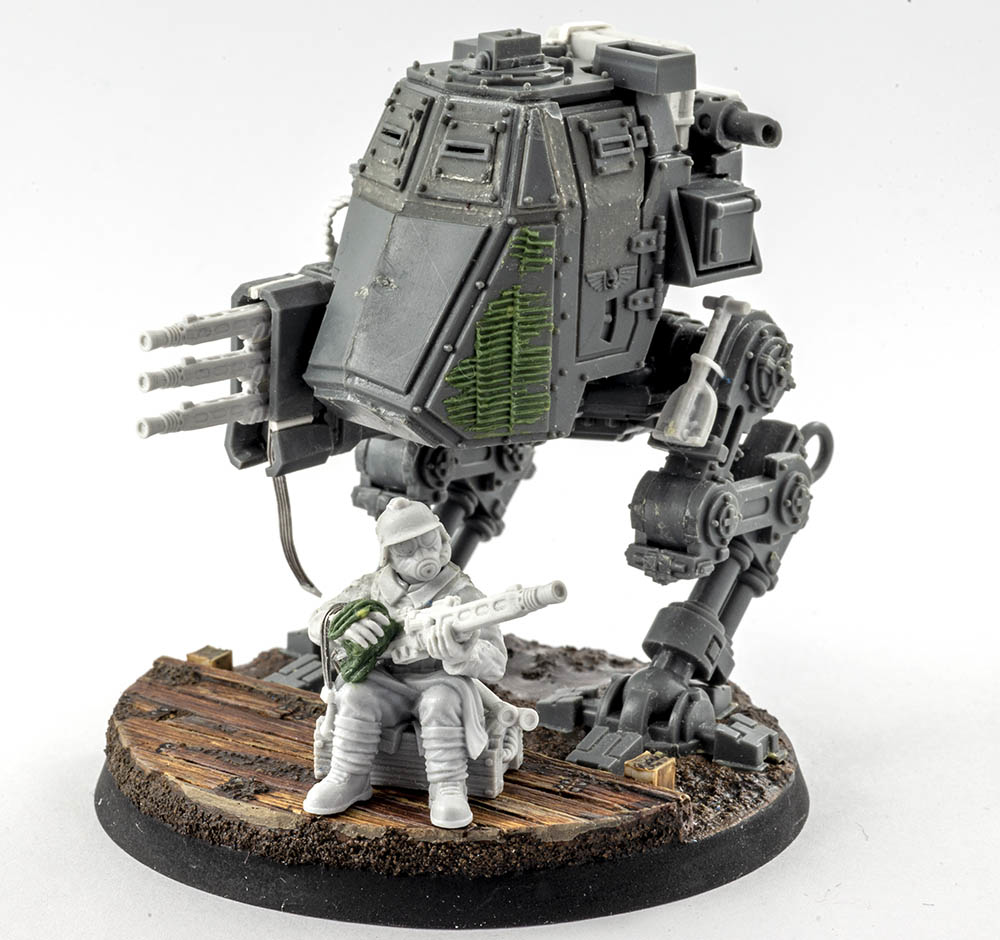 The “Krieg-Sentinel” was a lot of fun to modify into a more squat, chunky looking mech. It’s most obvious conversion being that it is now sporting a gun-pod (modified from the rocket-pod from the Sentinel kit) with four of our MG-42 Regiment weapons! The pod was fairly easy to alter by using a hobby knife to carefully remove the rocket nose-cones and then the backing plate from the front armour cowling. Once complete I stacked three MG-42s on top of one another, carefully removing the carrying handle from the top of each one first, and then inserted them into the now open pod.

While there is easily enough space in the pod to fit all four MGs, I decided early on that I wanted this to be a mini diorama, and wanted to include a full Regiments figure on the base to really evoke a mood for the piece. I removed the bottom of the front casing with a hobby knife, bifurcated it and set them back in place on some 0.5mm plastic rods to simulate a hinge mechanism. I then added four thin wires in the style of an old fashioned data transfer cable that, I’m imagining, coordinated the aiming and firing mechanism of each of the guns. 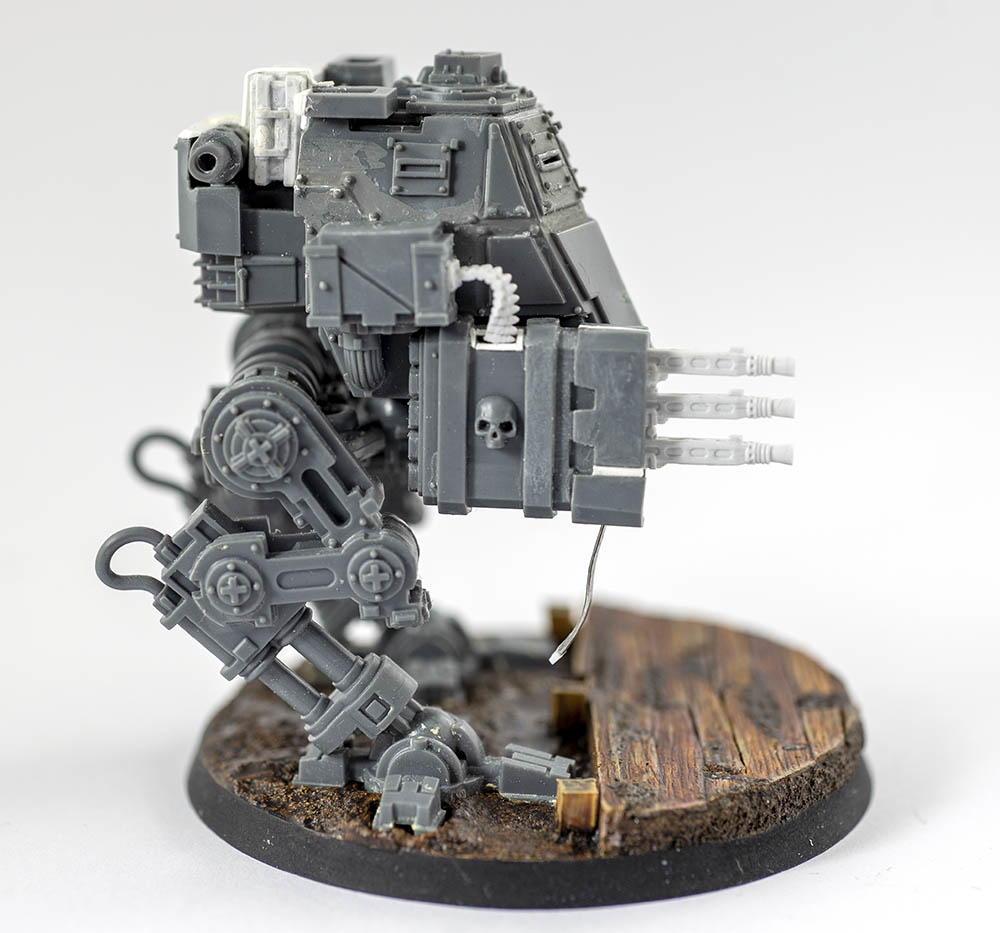 As a final addition for the gun-pod, I opened up a small rectangular hole in both the pod’s upper surface, and the forward facing surface of one of the ammo boxes found in the Sentinel kit. I framed them with pieces of plasticard and then maneuvered one of the spare ammo belts from our MG-42 set so that it looks as though the ammunition for the pod is belt-fed from the ammo box. This was a tad difficult and required using a hairdryer and tweezers to achieve the desired shape, but I think it was well worth the effort! Our resin is flexible as-is, but needs to be heated to allow for such a radical twisting of the part. Be careful if you attempt this yourself!

The engine exhausts have been reworked to be venting sideways, which needed just a little plasticard to hide the seams. I did this to keep the entire model feeling compact. To fill in the larger gap between the new exhaust position and the back of the Sentinel’s pilot cab I found one of our Modern Crates to be not only a perfect fit, but also keeps the Sentinel from having any negative space in its overall profile; which adds to the overall feel of weight that I wanted to introduce to the miniature.

The addition of a few more details, such as the Entrenching Tool on the driver’s side upper leg, and some green-stuff shaped to look like weather-worn zimmerit (a World War 2 anti-magnetic paste) completes the Sentinel, and alludes to a story outside this single miniature. The driver is entirely made of Anvil Industry parts, simply assembled in a sitting position on top of our Wooden Crates kit. Here you can see him using a Green Stuff simulacrum of a rag to clean the fourth MG-42 that has been removed from the gun-pod. The trailing wires show how the entire mechanism could be connected and adds just that little bit more verisimilitude to the diorama. 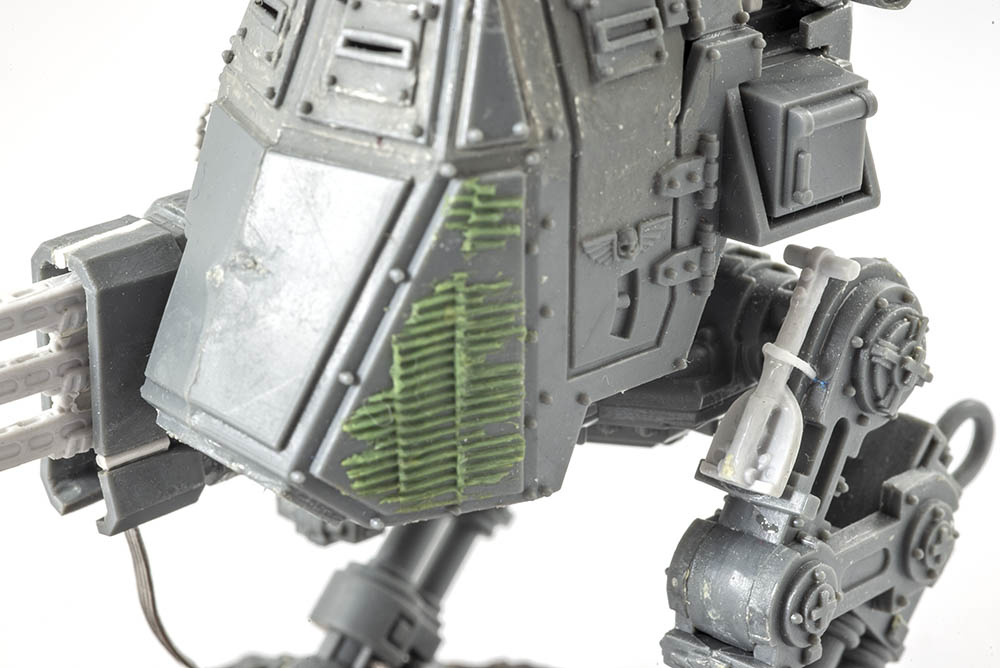 The addition of a scenic base featuring lots of mud and a planked deck for the Kriegsman to sit on is the final touch needed. This was simply made with PVA, sand and balsa wood. I hope that this gives you a taste of what can be done with just a few small and simple modifications to unify your entire army into one style.

The “Expeditionary-Sentinel” was a much more demanding conversion than the Krieg-Sentinel. It features a lot more plasticard rods, beams and generally a lot more modification of the Sentinel itself, including the open door to the pilot’s cab and a rebuild of the Sentinel’s control-sticks. The eye catching addition of the Howitzer Cannon and a feed mechanism for the cannon’s shells certainly was the most complicated modification, but it truly makes the Sentinel stand out and was well worth the effort. I also made sure to emphasize the Sentinel’s lithe form by posing the legs at full extension and choosing the open roll-cage style cockpit. 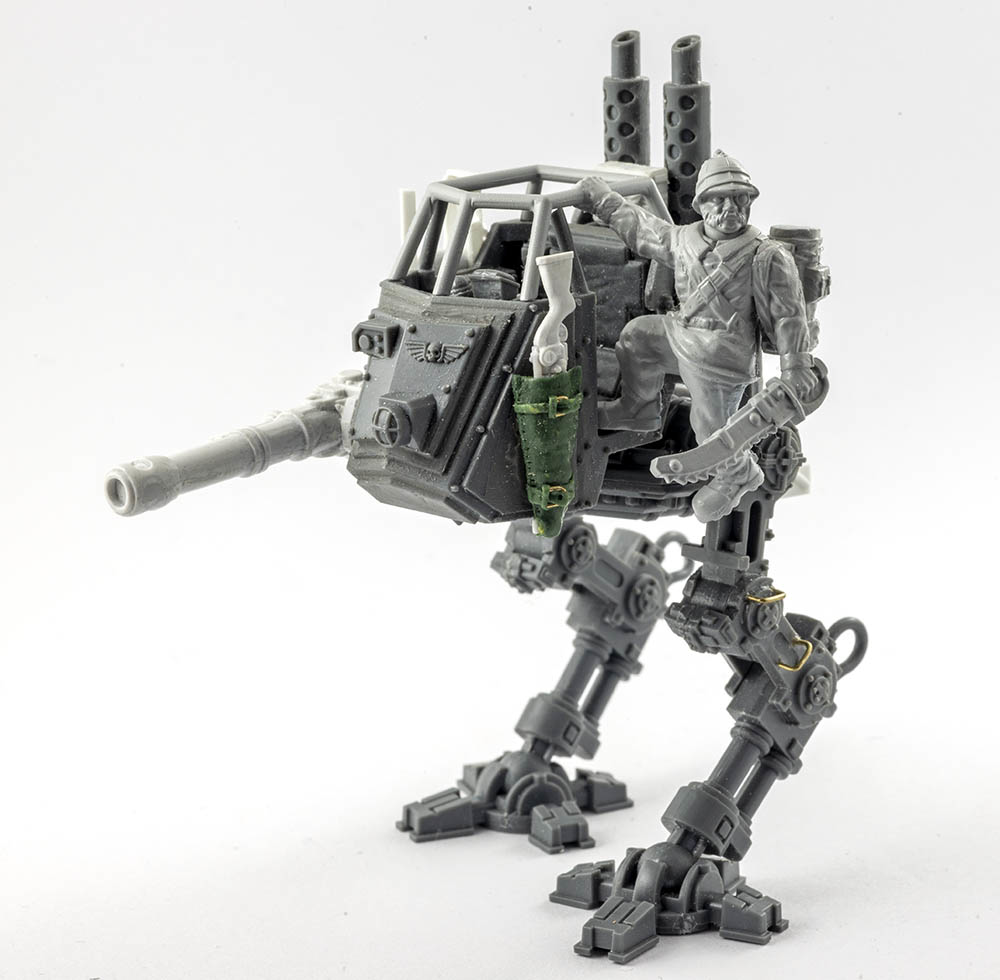 The Howitzer was attached to the side of the Sentinel after a little sanding gave it the correct alignment to the main chassis. The extra detail on the weapon mounting point for the Sentinel needed to be completely removed to provide a flat surface. Next came a painstaking process of building the shell-feed system that could allow the cannon to fire automatically for several shots. The shell-feed was made with pasticard profiles, both flat rectangles, rods and cylinders and then filled with ammo from the Artillery Shells set. 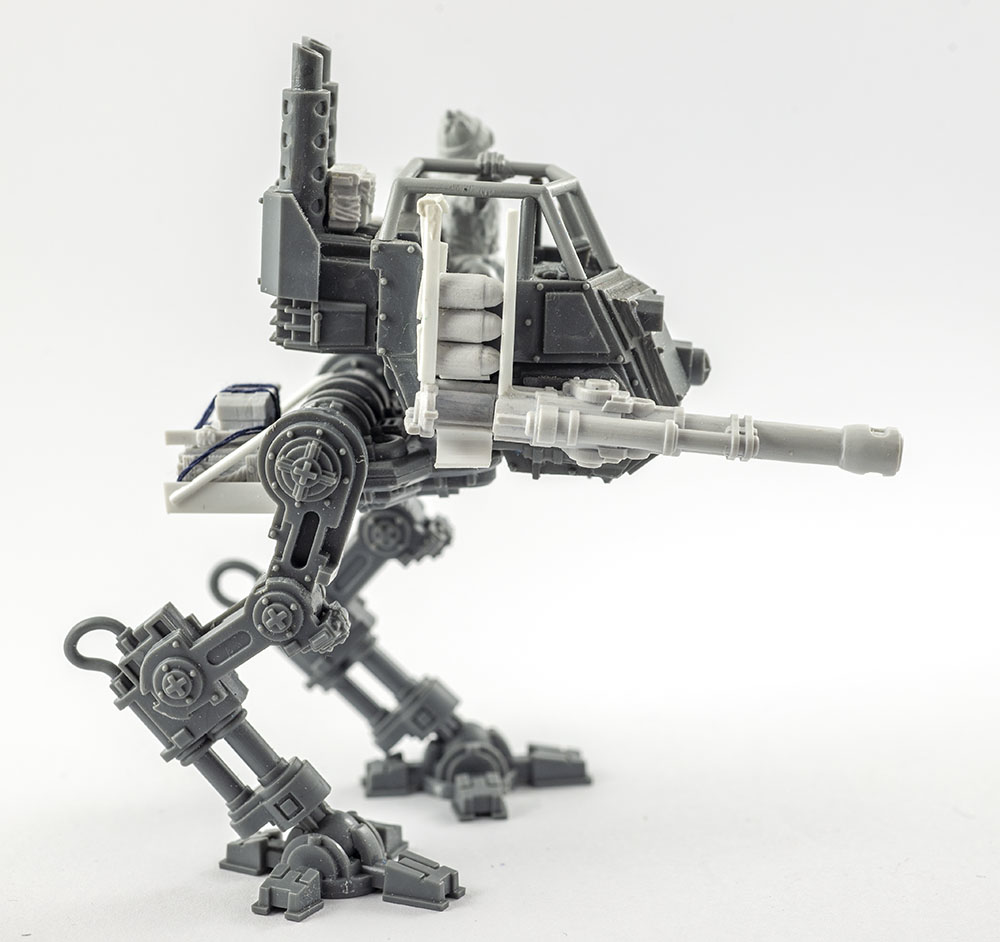 After carefully removing the Sentinel’s door to the pilot’s cab I could begin making and positioning the pilot. Made from all Anvil Industry parts, the Chainsabre-wielding expeditionary strikes a dramatic pose on dismounting the Sentinel. I wanted to give a sense of the pilot surveying the surrounding as he explores unknown territory, and gave him a large backpack alongside the Sentinel’s own large amount of stowage. The gun boot was made from greenstuff wrapped around a Mosin Rifle and then detailed with more GreenStuff and copper wire. 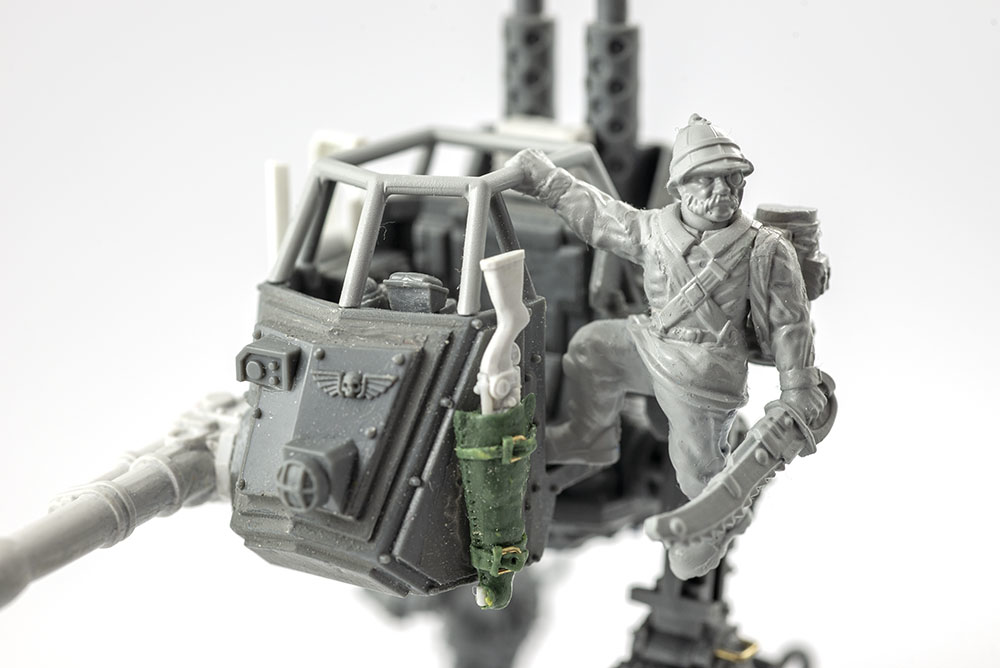 I imagine a scenic base will really help set the mood for this Sentinel diorama and plan to use small aquarium plants and lots of grass tufts to give the impression of the explorer emerging from the jungle into an open savannah. I hope that this gives you a taste of what can be done with just a few small and simple modifications to unify your entire army into one style. 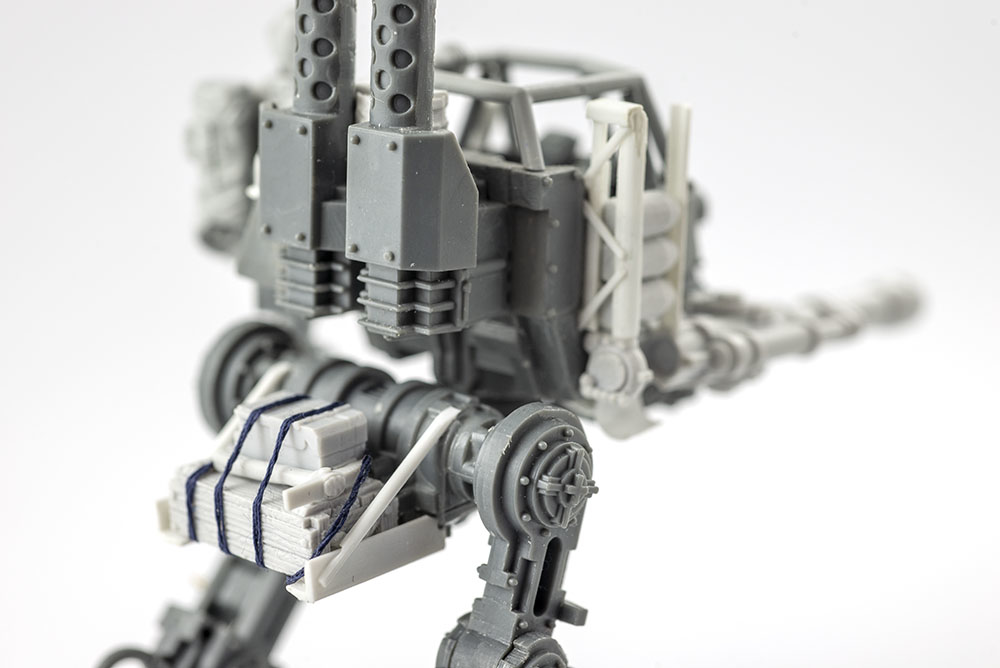 Anvil’s conversion parts can be used to create more than just infantry models, and if you need your trusty mechanical scouts to fit the same theme, this should give you some inspiration and a starting point as to what you can do with our parts!

Leave your comment
Comments
Guest
9/9/2020 5:03 AM
nicely done, really looks good
Guest
9/9/2020 10:27 AM
Excellent!
Guest
9/9/2020 5:47 PM
This is amazing!  Great work!
Guest
9/14/2020 9:29 AM
Wow, awesome little dioramas. May have to steal this idea :-p
Guest
10/8/2020 10:34 AM
Very cool conversions, love the gun pod on the kreig mech, I love the feel of the other machine, the howitzer is a really good choice of weapon as it can be used in direct and indirect fire.
I have but one criticism, I feel the howitzer's muzzle break, if it is to do it's job, needs to be carefully sawn off and re-positioned horizontally, to direct the muzzle blast to either side, instead of directly into the ground and sky, which would amplify recoil.
Guest
11/18/2020 6:22 PM
Might have to borrow this idea for my Krieg inspired army! keep up the beautiful work
Blog search
Blog archive
Popular blog tags