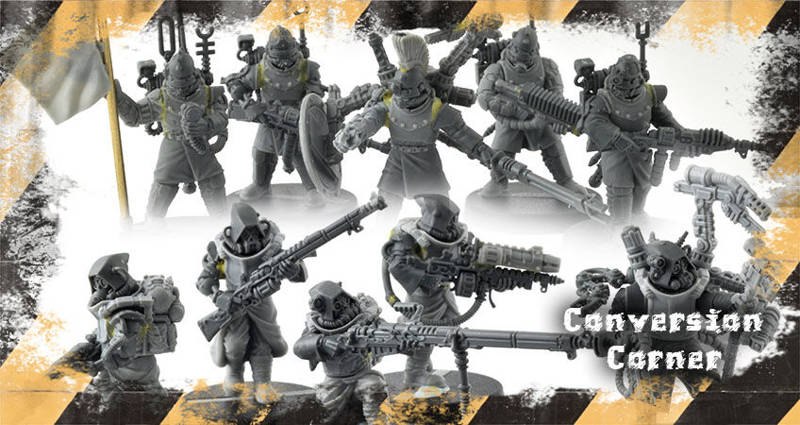 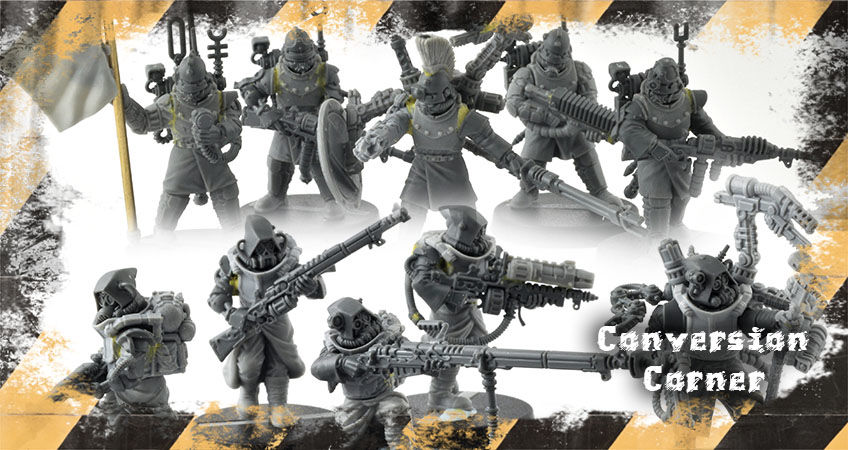 Welcome to our regular Conversion Corner feature, now in its new home on our main blog!

Images in this Conversion Corner feature many component parts which are copyright Games Workshop Plc TM, and come from their Adeptus Mechanicus TM Skitarii Ranger and Vanguard kit which you can purchase here - https://www.games-workshop.com/en-GB/Skitarii-Vanguard-Ranger-Web-Bundle
Games Workshop, Adeptus Mechanicus, Skitarii Ranger and Vanguard are all Trade Mark and Copyright Games Workshop PLC.
This feature is not associated with Games Workshop in any way. Images of their components are used to provide examples of possible conversions to inspire hobbyists own modelling projects.

This week, Adam has put together some imposing figures using parts from our Regiments Trench Fighters range, and plastic components from Games Workshops Adeptus Mechanicus Skitarii Ranger and Vanguard kit.

Regular Skitarii have many robotic parts and are comparatively lightly armoured. By using leg and torso components from our Regiments range, combined with arms, weapons, heads and accessory parts from the Adeptus Mechanicus Skitarii kit, Adam's figures look more recognisably human and better armoured. If you try this conversion yourself, you could perhaps use them to represent Skitarii units which have been recently formed and have not had all their internal modifications completed. 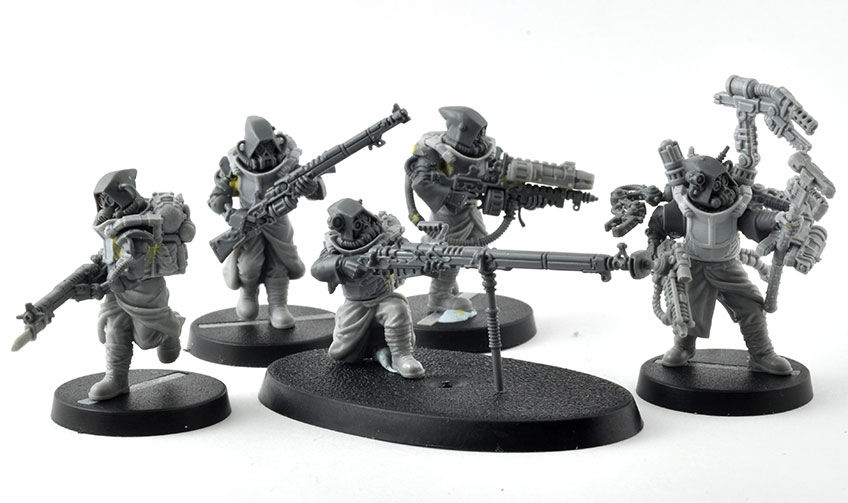 First up, we have a Skitarii ranger unit. Adam has used our Long Greatcoat leg sprue (available in a few weeks time) to make the figures look really mobile. While the Gothic Void torsos provide seriously heavy armour and hazardous environment protection.

The unit commander is additionally equipped with a Tesla Disintegrator and our Infantry Mechanical Arm Conversion Set, which has been modified and combined with various Skitarii parts. One specialist features the top part of the Quake Cannon from our Lance carbine kit, used to make a more unusual looking energy weapon. 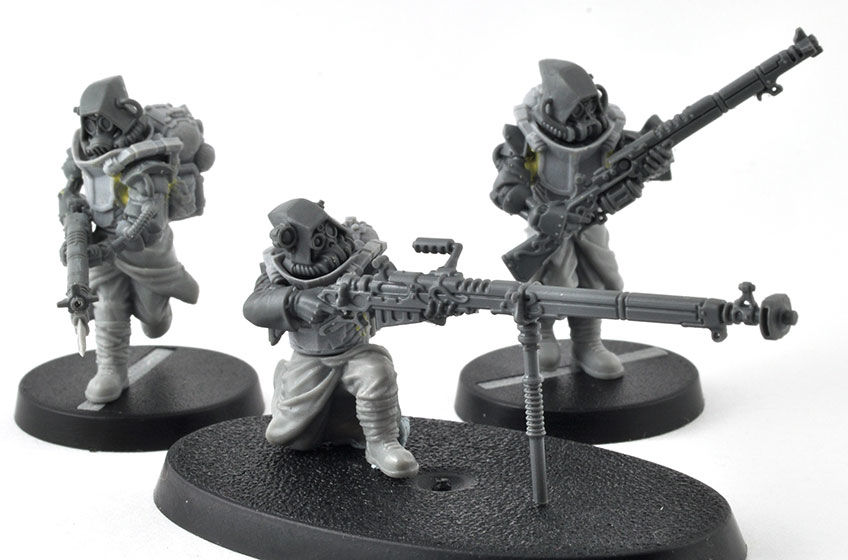 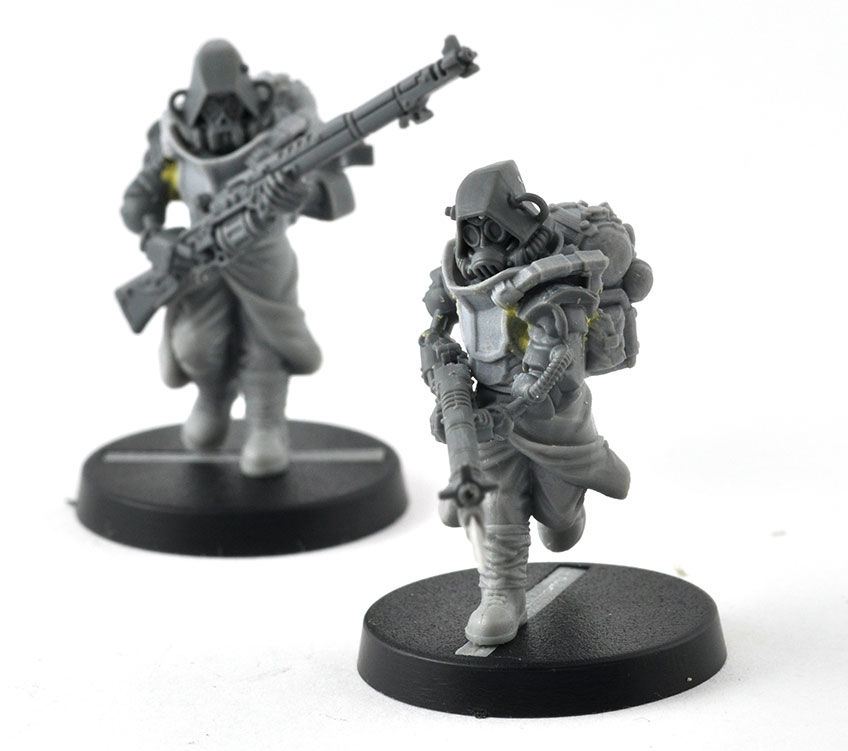 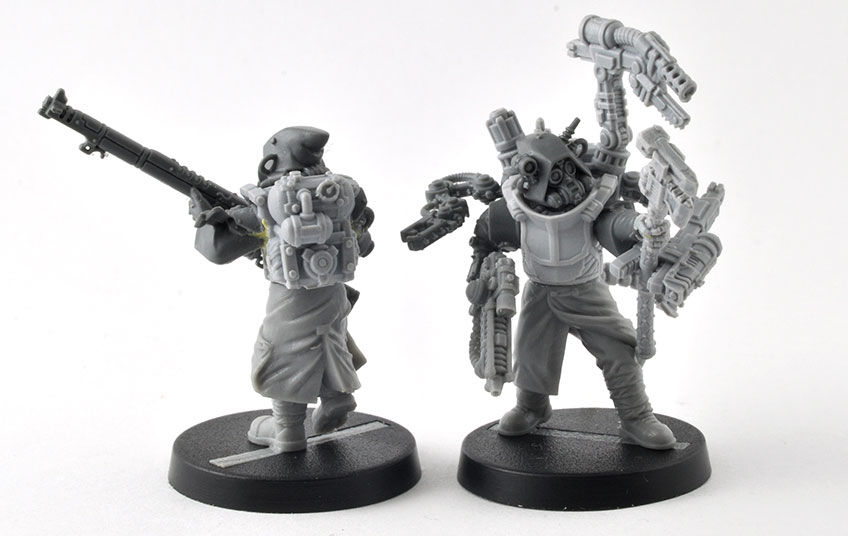 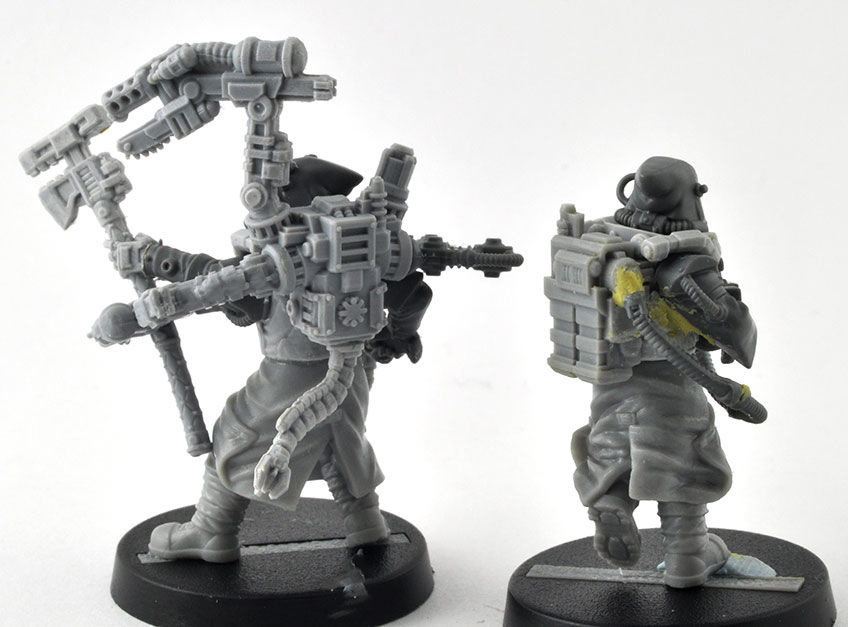 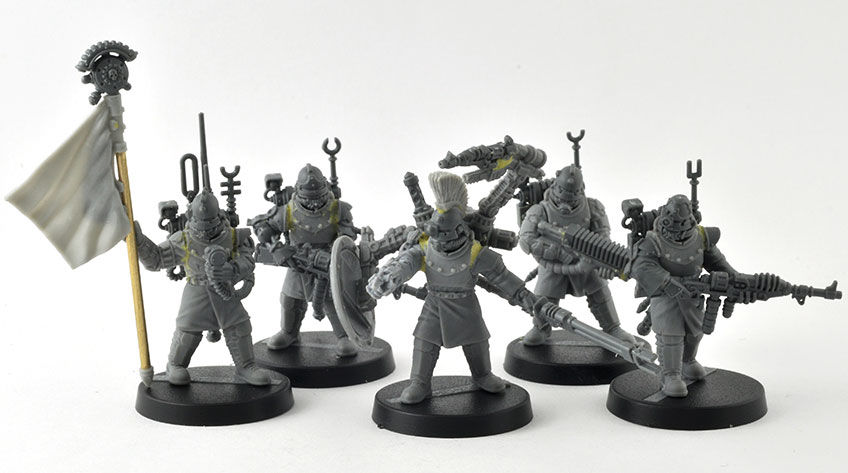 Using our Short Greatcoat legs and Medieval torsos gives these Skitarii Vanguard a very feudal/medieval look. As well as Skitarii arms, Adam has also used our Regiments armoured arms for one specialist and for a standard bearer (using our new banner kit, available soon!).

The unit commander again uses our Infantry Mechanical Arm Conversion Set, this time equipped for melee combat with an attached Spartan Shield. The model also features a spartan crest from our Exo-Lord range attached to the helmet, and a partially bionic arm from our Afterlife Raider Exo-Mech kit.

If you like these conversions and want to have a go yourself, keep an eye out for the launch of our new Trench Fighter components, which launch in mid-March! 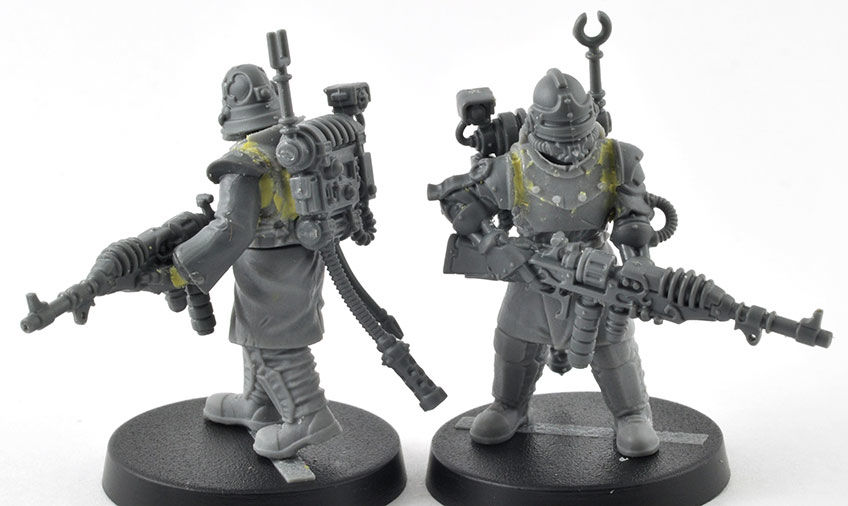 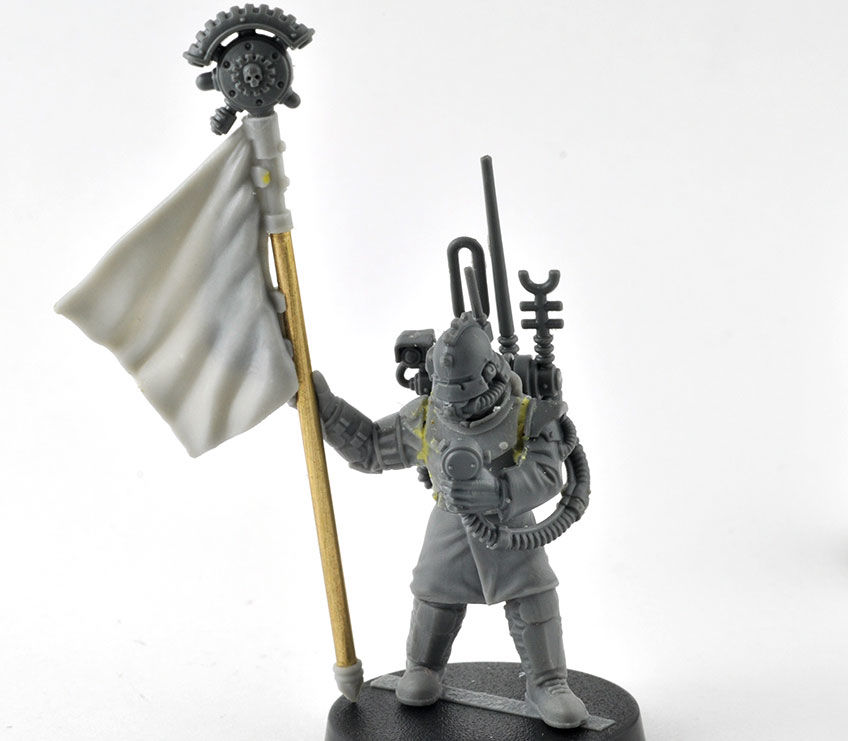 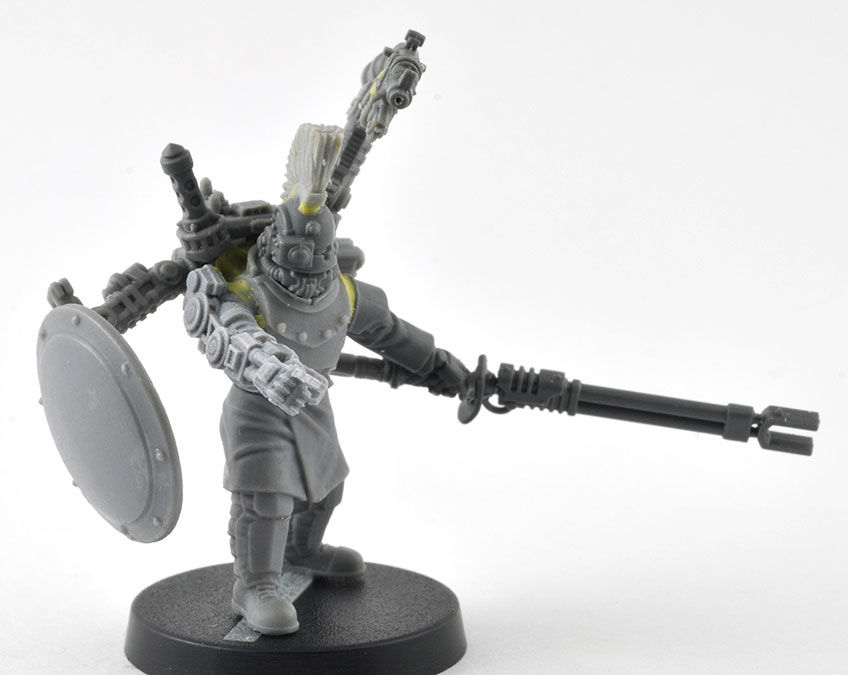 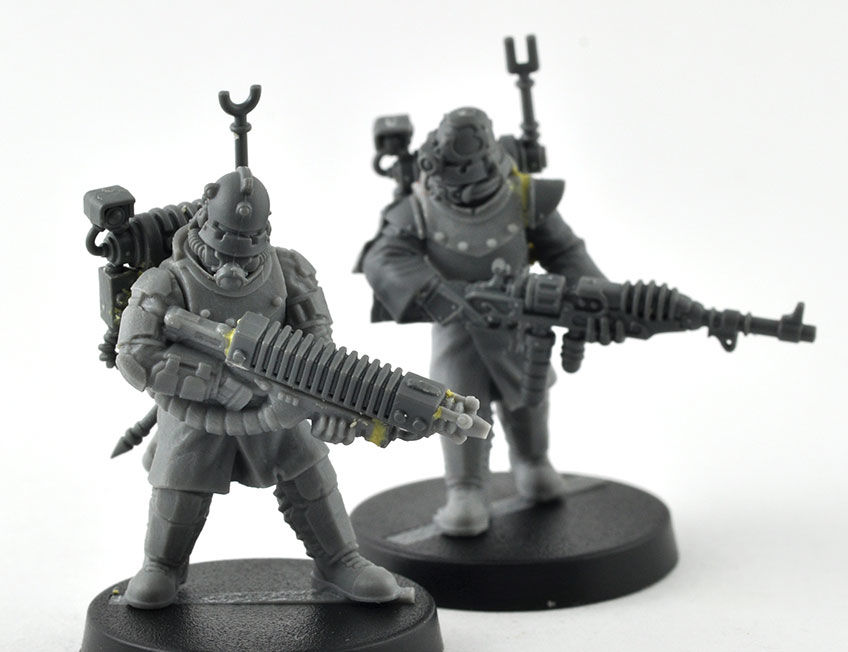