Afterlife : Our biggest studio game yet! 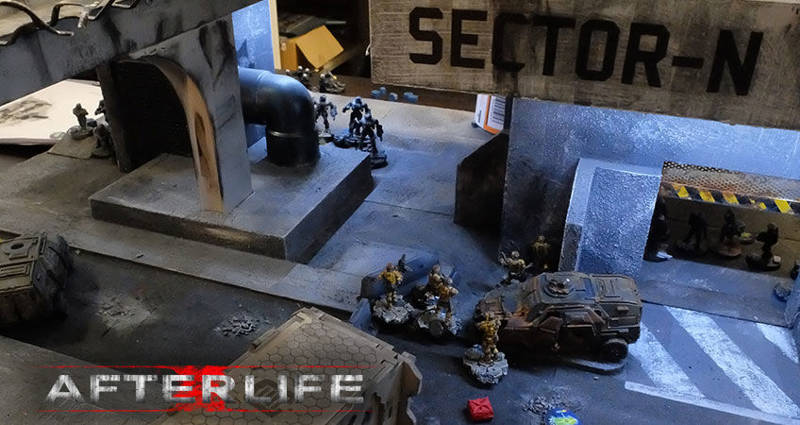 We are back from our Christmas break and, having spent the majority of last year working on other projects, we’ve decided now is the time to start working again on our Afterlife game system and miniatures range.

From now on we will be committing regular full days exclusively to the development of the game and miniatures range. Expect a longer blog post soon with more details of our exciting plans for 2017!

To kick things off appropriately, yesterday evening saw a truly huge game of Afterlife, using almost every painted Afterlife model we have in the studio to create Council and Republic forces of over 2500 points, including several Character models (new rules due out soon!)

To keep the game flowing we had two players on each side of our massive Unity City game table, which measures 5” long, and almost 3” wide and tall, with nine playable building levels! 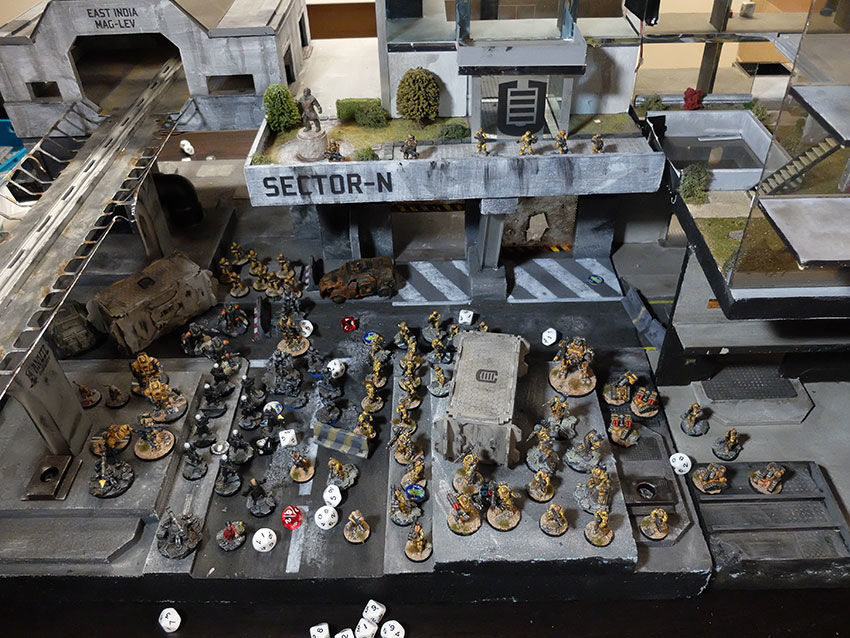 The stage was set for a cataclysmic battle - the only objective : be the last one standing when the smoke clears. 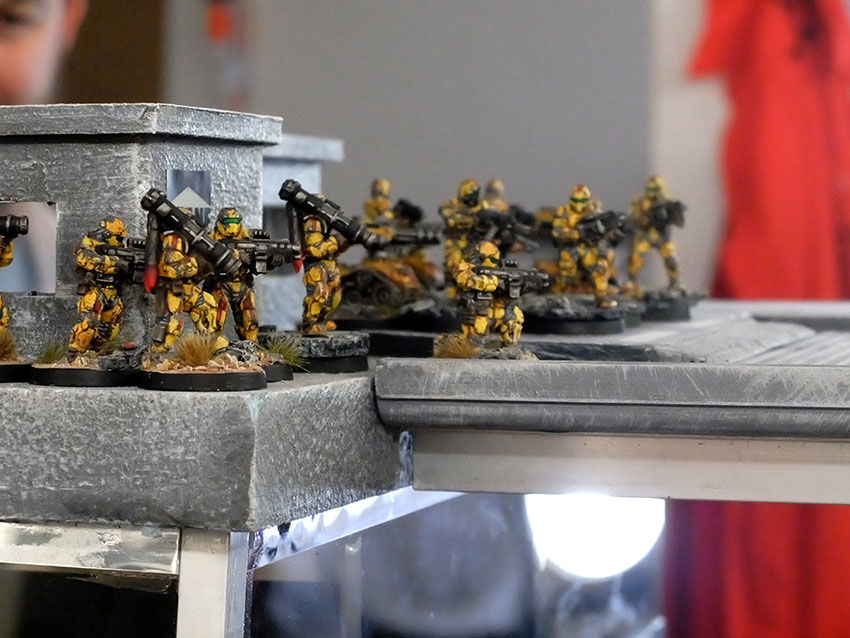 Making use of the multi level board, both sides deployed to try and capture the all important high ground. Ellion Hesp led a team of grenadiers into a vicious firefight with Lucretia Chang and her personal body guard of marines and Ajax exo-mechs. 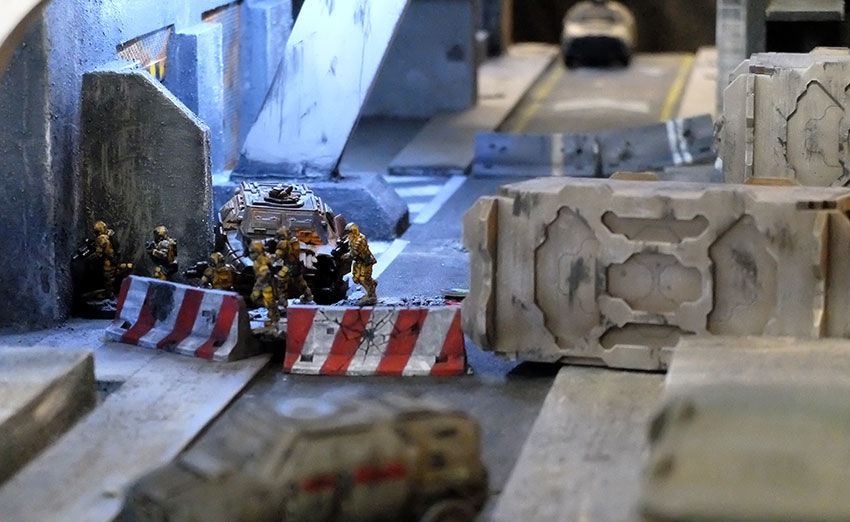 Idaho Yoshida entered at ground level with his commando team, deploying far forward to try and capture the centre. 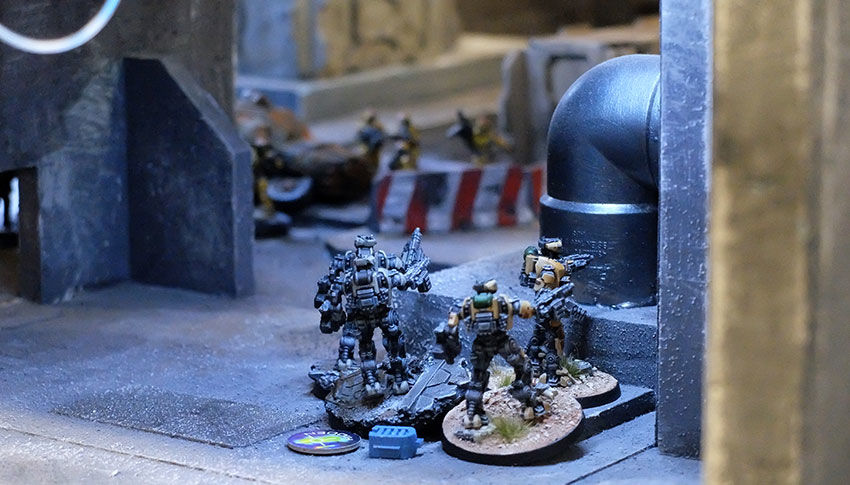 The Unity Council players deployed a number of infantry Units in the lower industrial district, backed up by serious fire power in the form of these C-48 Warden Mechs. 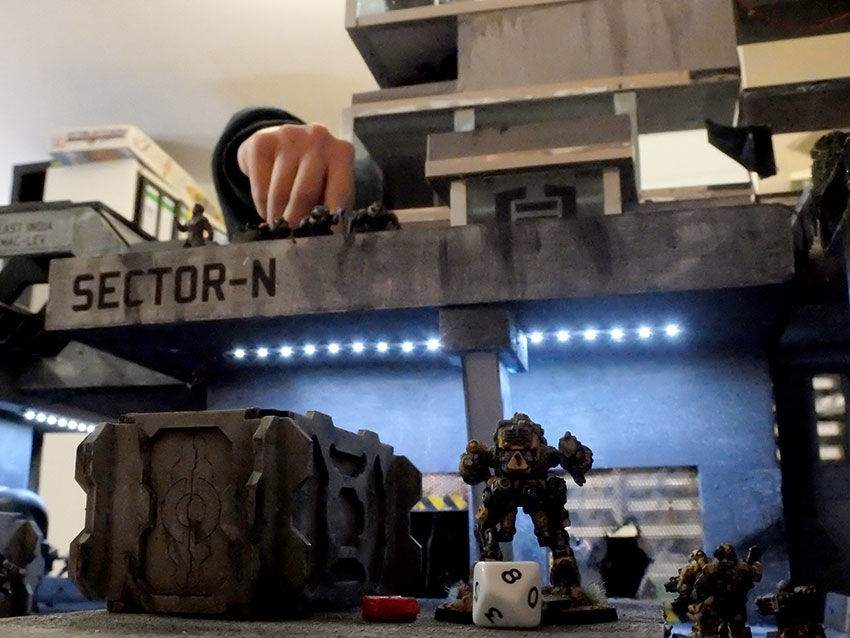 To counter the threat, the Republic deployed a Goliath Mech, which was ultimately engaged and destroyed by an Ajax team which held the high ground. 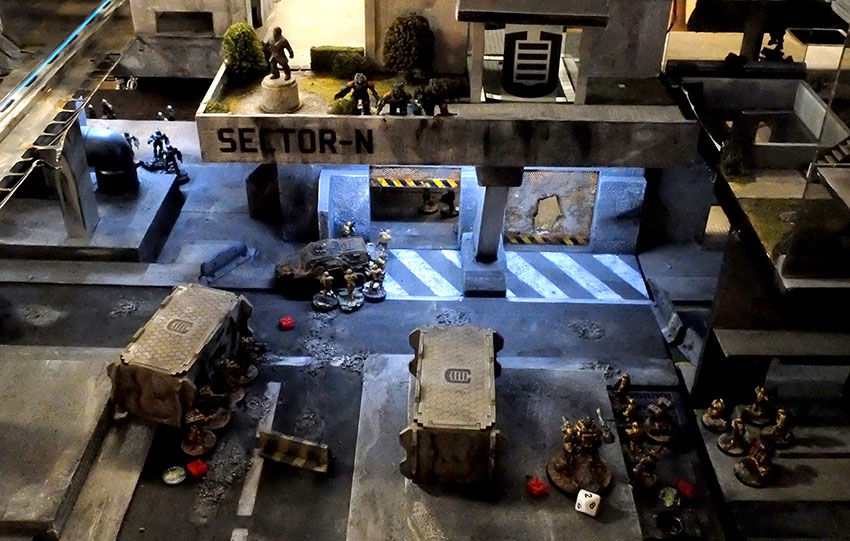 An overview of the lower industrial level during Turn 2. The Republic forces advance over the road to try and capture the building held by Ellenor Renard and an elite team of Spectre operatives. 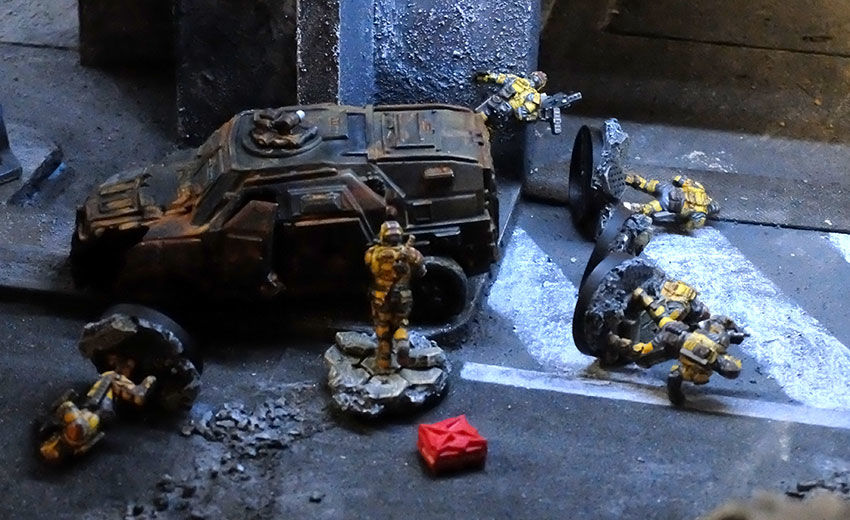 Idaho Yoshida led the charge, entering into a blistering exchange of close range fire power which left Ellenor Renard, her entire spectre team and all the Commandos dead, except for a rather shell shocked Idaho. 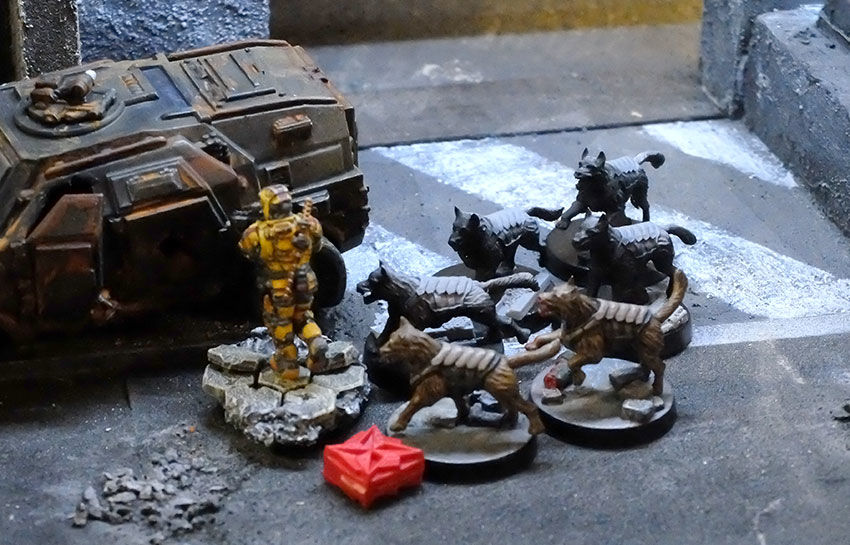 There was no time to rest ,as moments later he was set upon by an entire pack of vicious Stim-Hounds. We all thought he was doomed, but thanks to some very lucky dice and some help from hidden snipers, he managed to kill half the dogs and escape to safety, making him a worthy recipient of the man/woman/robot of the match award! 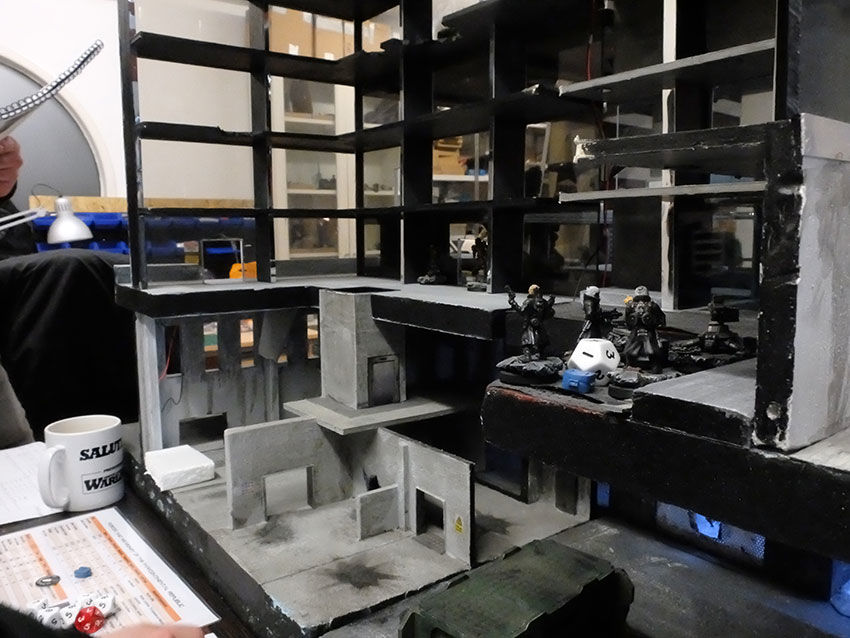 On the mid levels inside the building, Isiah Cortex led a determined Unity Guard resistance, but was eventually cut down by the lethal PROTOS avatar. 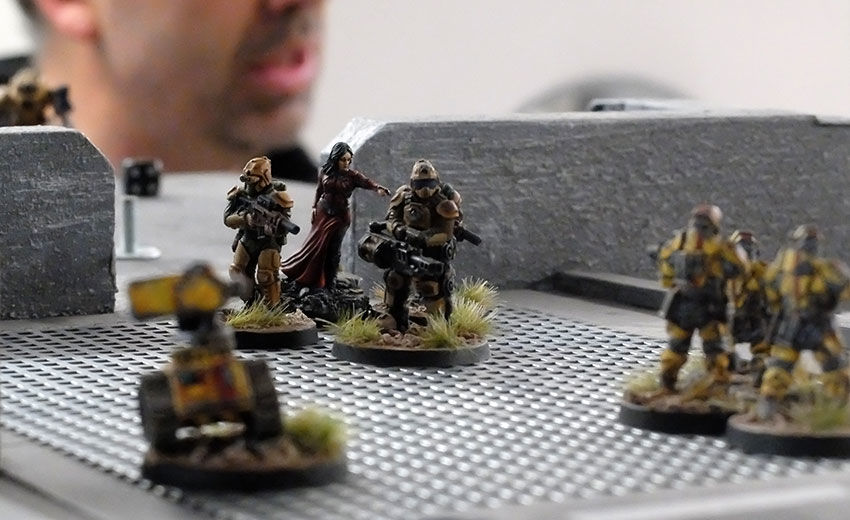 On the roof top, Lucretia overcame considerable numbers to claim victory for the Council, A lone surviving Ajax from the rooftop battle was then able to descend several floors and ambush the PROTOS, ensuring council dominance of the upper levels.

While the Unity Council clearly claimed control of the upper levels. On the ground floor, Idaho and his remaining commandos were the only survivors. Given the distance of several real world feet between the shattered remnants of both forces, we decided to declare the battle over at the end of turn 4.

The game was utter carnage and great fun, and we look forward to bringing you more battle reports soon! 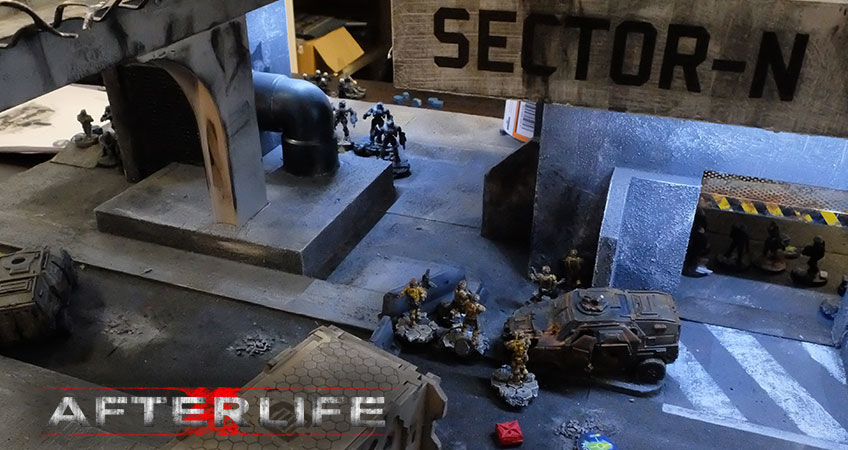